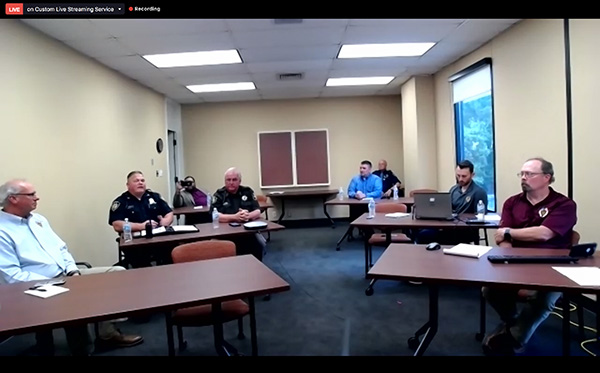 A previous version of this article misnamed Matthew Hickok. We regret the error and are happy to correct it.

In the wake of nationwide events including protests and riots in response to George Floyd’s death and the actions of officers of the Minneapolis Police Department, area residents took the opportunity to put their questions to local officers. Floyd, a 46-year old black man, died after Minneapolis police officer Derek Chauven had his knee pressed into his neck for nearly nine minutes as he was handcuffed and held down in the street.

The meeting had an express time limit of one and a half hours for citizen questions.

Zoom attendee Fredda Zeiter questioned why the Niles City Council was not in attendance for the meeting, and why no women were represented in the forum.

“We hold city council meetings every two weeks where community members can speak to the council,” Shelton said. “They didn’t want to take away from law enforcement.”

“Does the police department require that all their use of force be on their reports? What is the policy on chokeholds and strangleholds?” asked a Zoom attendee, listed as “Mariette.”

Millin answered with the city’s statistics, stating the Niles Police Department handles about 14,000 calls for service where officers interact with citizens.

Millin acknowledged the numbers had increased, but attributed it to a better reporting strategy by the department. He also added none of those incidents had resulted in serious injury or loss of life.

He addressed the use of chokeholds and strangleholds within the department.

“We are not taught chokeholds,” Millin said. “If somebody is ever to employ a chokehold, it would be under a deadly force situation.”

He described later in the meeting how officers are trained to strike people with a knee or a baton on certain parts of the body to gain what he called “pain compliance.” The aim of the strikes he described was to strike areas with nerves to cause pain while minimizing injury.

All of the officers in attendance emphasized citizens should file a complaint if they believed they had been mistreated in an interaction with police. Millin added if a citizen has an interaction with an officer that is less than professional, they should try to get through the interaction as best they could.

“You’re not going to make it any better trying got argue your point with him,” Millin said.

He said the next step, after getting through the interaction, would be to call the department’s administration to report the incident.

“Law enforcement knows that we are not the only one with cameras,” Bailey agreed. “If we have an incident that’s occurring, most people are recording it, so we train for that.”

From Bryant’s own Facebook Live stream of the meeting, he relayed a question about mental resources put in place for educating police officers about anxiety, advance training in mediation and implicit bias.

Millin and Bailey both confirmed it is a topic in officer training that is gaining momentum in the state of Michigan, but is not widely available. Millin confirmed the Niles Police Department, in lieu of availability of face to face training and remote, has distributed reading material and reports on implicit bias. Bailey said officers in Berrien County are required to watch at least two training videos a month, if not go to training classes.

Another question brought to the panel was by Zoom attendee Timothy Nixon.

“One of the challenges that African Americans face is the issue of trust,” Nixon said. “Often when they encounter members of law enforcement, it is rare that they see someone who looks like them. How well are the law enforcement agencies that you represent integrated with personnel of color? If that is not well represented in those areas, what are you doing to increase the diversity in your law enforcement department?”

Millin answered, stating the Niles Police Department had not had an African American officer in the last six years on the force.

“That’s not for lack of trying, necessarily,” Milin said.

Millin spoke of efforts trying to recruit officers over the last three years. In addition to recruitment overall becoming tougher, with fewer applicants to police departments, other departments are able to pay a higher wage to officers.

“We’re having a hard time getting people to even apply that want to be a police officer right now,” Bailey said. “It’s very difficult in our area [Berrien County] also to get outside minorities to come down here and apply when they can go to the east side of the state or to Grand Rapids and make $10,000 to $15,000 more than here. There is some of the problems we have, not trying to make excuses.”

Bailey added if anyone listening to the call was interested in law enforcement and a minority they could fill out an application on the local law enforcement’s website, and he would try to get it looked at right away.

At the end of the meeting, focus shifted to the need for continued dialogue and the protection of citizens’ free speech.

“The dialogue has to continue with the city and the community,” Bacon said.

He emphasized, as an African American pastor, he needed to speak for his community.

“We are here today because what has happened in the African American community,” he said, followed by addressing the officers in the room. “I appreciate your transparency. We have to continue the dialogue moving forward in the future.”

Millin agreed, and said he was willing to continue meetings with citizens to answer questions and address concerns.

Finally, Shelton read a statement from an anonymous Zoom attendee: “A lot of African Americans are afraid to make a complaint, so most of the time complaints don’t get made.

“I can tell you no officer wants to work with a bad police officer,” he said.

He went on to say if departments get complaints and reports, they would note it and address it.

Bailey added if people were afraid to fill out or make a report directly, a report could be given through a local pastor to the departments.

CALVIN TOWNSHIP — A Vandalia man was injured in a Calvin Township crash Friday, according to the Cass County Sheriff’s... read more