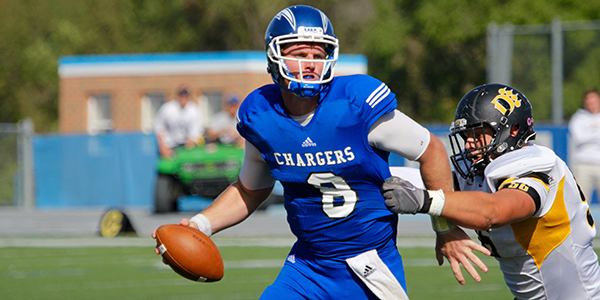 Wolverine Conference has a new coach

“During the interview process, Chance’s passion for football was quite evident,” said Sturgis Athletic Director Mark Adams. “He demonstrated incredible knowledge of the game on both sides of the ball and special teams. He has a vision and blueprint to build a sustained, competitive football program at SHS.”

After playing for the Trojans, Stewart originally signed with the University of Wisconsin. After the Badgers’ head coach departed for Arkansas, Stewart went to Hillsdale College, where he led the Chargers to the Great Midwest Athletic Conference championship in 2018.

Stewart graduated from Hillsdale in 2019. He was voted team captain in 2018 and 2019. He was the GMAC Offensive Player of the Year in 2018, as well as being named an All-American.

Adams saw great potential in Stewart as a player at Sturgis.

“I have witnessed Chance’s remarkable leadership skills since the moment he stepped into his first huddle at SHS as the freshman quarterback on the varsity football team,” he said. “He took command immediately. Chance is the most natural leader I have encountered in my 30 years of collegiate and high school athletics, and I believe his leadership and football knowledge will pay great dividends for Sturgis Trojan football.”

BUCHANAN — There remains no word on the status of the RedBud National at Redbud MX in Buchanan as part... read more