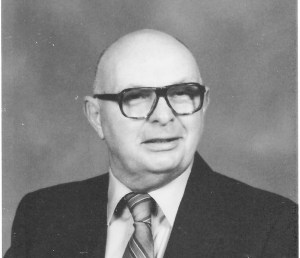 He was born on May 6, 1928, in Egg Harbor, New Jersey, to Edward and Frances (Grumer) Conover. He came to Niles at the age of 6 months and lived the majority of his entire life there. He graduated from Niles High School in May of 1946.

He was a member of St. Paul’s Lutheran Church, Niles, where he had served as an usher, youth group leader and choir member.

In his boyhood and teen years, he delivered papers and worked in John Marks Grocery Store. After graduation from High School, he worked for the Original Cabinet Company, Simplicity Pattern and then became an apprentice carpenter with Harrison Andrews.

In 1950, he went to work for Kawneer factory; and in 1960, he began work for National Standard as a tool and die maker, where he retired in 1985 with 25 years of service. He stated when he retired that he planned to remain living in Niles, but may travel “south for the winter” and that he did — as he and his wife were fortunate to winter in Texas for 16 years where they made many friends. That was a special time for him — he loved it and when they were not able to travel anymore, he always talked about “going back to Texas.”

One of the things he was most proud of was the fact that, with the help of extended family and friends, he built a house for his family in the mid-1950s. He was a hard worker who always made sure his family was provided for, was strong in his faith and loyal to his country. He was a gentle man and loved to laugh.

Visitation will be from 11 a.m. to noon on Wednesday, June 3, 2020, in St. Paul’s Lutheran Church 1340 Sycamore St. Niles, with funeral services to follow at noon. Internment will take place at Silverbrook Cemetery.

Online condolences may be made at halbritterwickens.com.

Arrangements have been made at Halbritter Wickens Funeral Home 615 E. Main St. Niles.