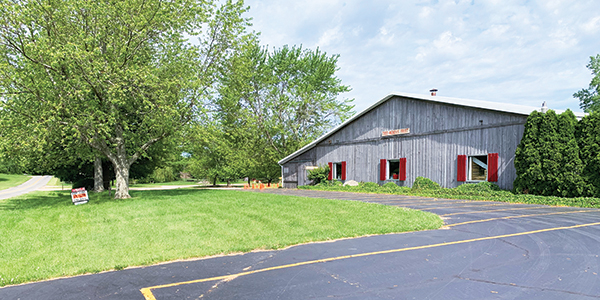 Part of Tree-Mendus sold at auction

EAU CLAIRE — A series of events, not related to each other, ultimately meant the demise of the Tree-Mendus Fruit Farm near Eau Claire.

First, owner Herb Teichman, who created the International Cherry Pit Spit, which was hosted on the Tree-Mendus property and drew participants and news coverage from around the world to the farm each July 4 weekend, died at the age of 88 in January 2019.

Then, Bill Teichman, a third-generation farmer of the property contracted eastern equine encephalitis last August and was hospitalized.

Finally, nearly four months later in December, the family announced on its Facebook fan page that U-Pick fruit business would close for good.

In March, the auction of the property, which was divided up into plots, was postponed indefinitely due to the COVID-19 pandemic. That auction was finally hosted on Memorial Day by Glassman Auctions. An 80-acre parcel was auctioned off, which included the building that housed the marketplace.

Dominick Moore, who has fond memories of spending time at Tree-Mendus, purchased the property for $335,000. He said he does not know exactly what the future holds for the farm.

Moore is not a farmer. His family owns Triple D Excavating and Moore, which is located up Eureka Road from Tree-Mendus.

“I grew up there as a kid, and the Teichmans are family friends,” Moore said. “Their son, Will, works for us now. I know he probably hated to see that place go as it did, but at least we can keep some of it so that if his family ever wanted to, they could have some of it.”

Although he is not a farmer, Moore knows that there are a lot of trees in the orchard that need to be removed.

“There are still some good apple trees there and some good cherry trees there,” he said. “As far was reopening the marketplace there, personally, I am not in the same market as someone else for that. We may possibly lease it out as a market or just rent it out as farmland as far as the orchards and the fields go.”

He added that things could change. He knows that there are already people who are interested in the property.

“People have already asked me if I would sell it,” Moore said. “I would rather not, though. It has a huge potential with the marketplace that is there. It could be a restaurant or anything. A brewery. It has a lot of potential. That is down the road. I would like to keep the land and everything though, so I do not see it going anywhere. It is some of the best pieces of land you will ever find in the area.”

Moore said that he did not buy the property for himself. He bought it so that the property could be used by the people — but just what that use will be is still up on the air.

NOVAK: State guidelines answer how, but not when sports will restart

I was a bit disappointed in its content after waiting for an email from the Michigan High School Athletic Association... read more