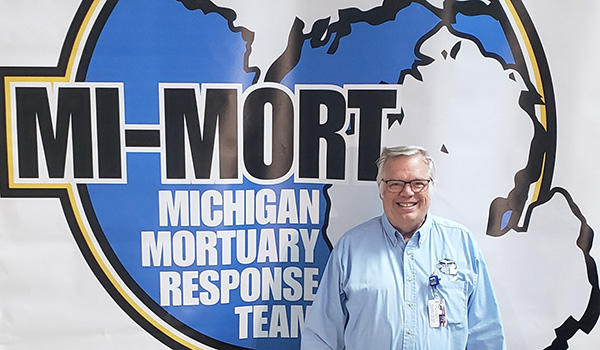 NILES — Frontline heroes ensure a situation is handled from start to finish. They run toward a challenge instead of away from it. At the end of April, local funeral director Jim Meyer was called to the frontlines in Michigan’s fight against COVID-19 in “Region 2 South.”

This region includes the three counties of Monroe, Washtenaw and Wayne counties. The city of Detroit resides in Wayne County and has been the hardest hit with COVID-19 cases and deaths in the state of Michigan, with 1,059 deaths reported as of Thursday.

On April 29, a press release from the state of Michigan announced that the Michigan Mortuary Response Team, MI-MORT, had been activated for the very first time. Since the team was created a decade ago, it has trained its volunteers to work with health care facilities and local officials. The response team is made up of individuals including medical examiners, law enforcement, professors of forensic science, dentists and pathologists. One of its approximately 40 volunteers from around the state of Michigan is Meyer, funeral director and embalmer at Niles’ own Halbritter Wickens Funeral Services. He has trained with the team since its beginning.

“We’re immensely proud of Jim,” said Steve Wickens, owner of Halbritter Wickens Funeral Services. “It shows a lot about his character. It helps define who he is. He truly cares about everybody. In this particular situation, he went into an area where it’s one of the worst-case scenarios we have seen in a long time, and he dedicated himself to making sure that those people were taken care of properly and that they were treated with the care and respect that should happen.”

MI-MORT is activated in situations of disaster to provide safe and secure transfer, identification and storage of human remains until families can make plans with funeral homes, according to Michigan public information officer Bob Wheaton.

When MI-MORT is activated, the team sets up a temporary morgue in the area hit by a disaster.

In this instance, the disaster presented itself in a different way than the team had trained. Instead of a natural disaster-type situation, a pandemic had a host of its own unique challenges.

“It came together very quickly, very successfully. Each one of the remains was removed from the hospital, and was treated with individual dignity and respect,” Meyer said. “We started calling families and families were able to call their local funeral director. The local funeral director would then contact us about coming to remove their remains from the temporary morgue. It all went very smoothly.”

Meyer said that one of the most remarkable things about the operation is that, despite being exposed consistently to COVID-19 positive cases, not one member of the MI-MORT team came down with symptoms of the virus.

“It’s a great testimony to really diligent use of personal protective equipment that the state provided us with,” Meyer said. He also credited diligent handwashing, hygiene and rigorous housekeeping. “Because of that discipline, the whole team served in this intense situation with no illness and injuries.”

As of this week, a month later, MI-MORT has fulfilled its current mission and is being demobilized.

“There was a great deal of satisfaction in serving the community successfully, and caring for each of those remains with dignity and respect, with the best interest of public health,” Meyer said.

Back in Niles, Halbritter Wickens Funeral Services owners Steve and Sabrina Wickens have been very supportive of Meyer’s actions. They have even taken on the task of handling some of the death certificates of the unclaimed remains.

“It does bring a unique perspective on things,” said Steve of Meyer’s work with MI-MORT. “You have to be ready for anything. It’s definitely pointed out that we have to be ready for any disaster or pandemic. It’s also pointed out that as bad as things are right now, imagine how much worse it could have been if there hadn’t been a group already trained for disasters.”

Back in Niles, Meyer is still keeping a social distance.

“We’re all sacrificing to make sure that everyone stays safe,” Steve said.