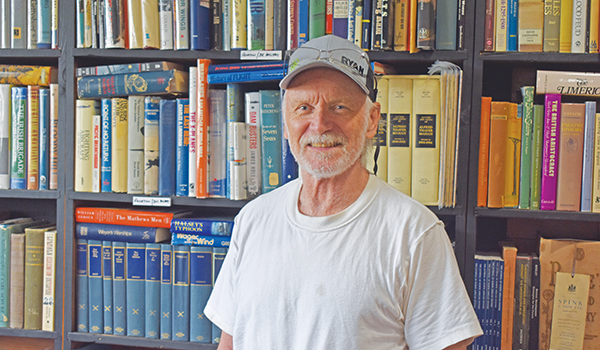 SOUTHWEST MICHIGAN — The Marshall Shoppe’s Cathy Franz rushed around her downtown Dowagiac storefront Thursday to meet customers at the front door, while also tending to the checkout and ensuring that racks of clothing stayed neat.

“This is the first day I’ve been really busy,” she said as she cleared a dressing room for an awaiting customer. “I can’t complain. I’ll stay open ’til 9 p.m. if I have to.”

While Franz had been offering curbside delivery, she said she was “very, very happy” when she heard that she would be allowed to open her store on a limited basis. Since the “Stay Home, Stay Safe” executive order initially closed her business in March, Franz said she had lost thousands of dollars in revenue that she will never recover.

“Obviously, I would have preferred the shutdown to be lifted, but at this point, I will take anything,” she said. “Something is better than nothing.”

Tuesday morning, Franz was at her shop on Front Street in Dowagiac, ready to serve any customer that might have stopped by or called for an appointment. Tuesday and Wednesday were slow days, but by Thursday, Franz said she had been working non-stop as customers kept coming, though never more than one or two at a time.

“It’s always been a rarity in small towns like ours that there are more than 10 people in a store at one time,” she said. “We are just adjusting to the new normal.”

About 14 miles down the road, Al Casperson leaned into a mid-century modern chair inside Casperson’s Books and Art, located on Third Street in Niles. Like The Marshall Shoppe, the used bookstore and art shop opened for appointments this week. Though his doors remain locked, a note on the business door features Casperson’s phone number. If a customer calls, he can be there in a minute — he lives right next door.

“This is a slow step in the right direction,” he said of appointment shopping.

Though Michigan stores were allowed last month to offer curbside delivery, Casperson said that was not an option for his business, as much of the appeal of his bookstore is to browse the titles.

“There was really no way we could have opened earlier. I had to just shut the doors,” he said. “Luckily, it doesn’t affect us as much because we are small.”

COVID-19 has forced both The Marshall Shoppe and Casperson’s Books and Art to reevaluate their business models. For Franz, that has meant better utilizing social media to advertise her stock and showcase her incoming pieces. For Casperson, that has meant appealing to a new audience.

Since closing his doors to the public, Casperson has been working to remodel the basement of his building into an area he said will better appeal to the younger generation. The downstairs area will feature couches and a lounge area for visitors to stay awhile and relax as well as sell posters, art, records, science fiction and $1 books.

While the renovation began before the pandemic hit, Casperson said the shutdown expedited the process as it allowed him to spend more time working on it.

“While we’ve been shut down, I’ve been very productive,” Casperson said as he toured the downstairs space. Though it is still unfinished, a few books line the shelves of its blue walls to give visitors an idea of what to expect. “In order to progress in the future, a business needs to adapt and appeal to the younger generation. … [The downstairs] is quite an addition to the shop.”

Even once the state’s “Stay Home, Stay Safe” order is lifted, both Casperson and Franz expect the return of customers and the recovery to the economy to be slow coming.

“Even when things open, I think [the public] will still hold back, if for no other reason than they are in the habit of staying home,” Casperson said. “It will be a slow comeback.”

Despite this, both are optimistic that their businesses will be able to come out of the pandemic intact with the help of communities and loyal customers that support them.

“I’m not throwing in the towel. I’m not going down without a fight,” Franz said with a laugh. “I’m so thankful for my loyal customers. … Right now is the time we need to be supporting our local businesses, and I think our community is doing that.”

For several weeks, Americans have been awaiting answers to several questions. When will restaurants restart dine-in services? When will hair... read more