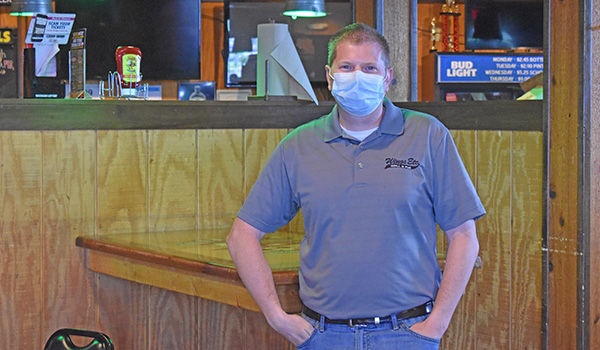 NILES — Walking into the Wings Etc. location at 2008 S. 11th Street, one is greeted with reminders to wear masks, if able. The dining room, once seating people watching sports events and enjoying a meal, has been transformed into a pick-up center for carry-out and delivery orders.

Wings Etc., known for its variety of hot wing sauces and its 34-ounce domestic beer “schooner” offerings, houses both a family dining section and a bar. Both areas usually feature multiple sports on flat screen televisions in the establishment.

About a year ago, Bayles expanded his business and became one of the owners of the Wings Etc. over the state line in South Bend, at 2455 W. Cleveland Road. Having restaurants in both states became more complicated as the mandates were issued by Indiana Gov. Eric Holcomb and Michigan Gov. Gretchen Whitmer in the wake of COVID-19.

For the South Bend location, its dining room closed first on March 16, but has since opened as Holcomb relaxed the mandates on May 11 to allow for 50 percent occupancy.

When the closures happened in Michigan, Bayles initially saw his business revenue drop 50-percent initially. Implementing delivery and carry-out helped that dip rise to a less stinging 35 to 40-percent dip, until Indiana opened back up. The dip in revenue returned to 50-percent as diners went over the state line, instead of ordering carry out and delivery.

“It’s definitely kind of a sucker punch,” Bayles said. “This is pretty much all I’ve done since college. I’ve put my heart and soul into this business. I take it personally, the success of this restaurant. It’s my baby.”

Initially, as the mandates closed the restaurants’ dining rooms, Bayles laid off a number of employees.

“All of my hostesses, bartenders, a couple of servers, a dishwasher and a cook,” Bayles said of those laid off. “I have since brought them all back.”

The crew has been put on additional cleaning and maintenance jobs around the Niles restaurant in preparation for re-opening.

“I am hoping that in the areas in lower Michigan less affected by COVID-19 will be able to open up hopefully in the next week or two,” Bayles said. “I am optimistic.”

Still, when the restaurant reopens, Bayles expects a year or two before he completely recovers from the financial losses of the closures.

Part of Bayle’s frustrations lies with the blanket mandates.
“I’m all about public safety,” Bayles said. “It should be the local health department that that says restaurants can open with these guidelines or these safety precautions. The fact that there is a scare of a pandemic is going to hurt our business to begin with.”

With the South Bend location bringing in diners, and hosting some of those who would usually frequent the Niles Wings Etc. location, Bayles has seen both sides of the situation.

“There’s a few customers that have been upset with what we have to do [in Indiana], but we have no choice,” he said of protocols such as wearing masks as diners enter the restaurant. Servers are also wearing masks. “Some of these procedures will be carried on to [the Niles] location when we open.”

In the meantime, Bayles will continue with carry-out and delivery from the Niles Wings Etc. Working with delivery services like Dine In-Delivery and DoorDash, and even delivering large orders to hospitals and construction sites, Bayles hopes to find a return to normalcy soon.

“I take pride in employing 45 employees. I don’t want to lay them off,” he said. “I feel good when I’m giving paychecks out, not taking paychecks away from people.”

DOWAGIAC — To keep everyone as safe as possible due to the coronavirus, the 46th Steve’s Run will take place virtually... read more