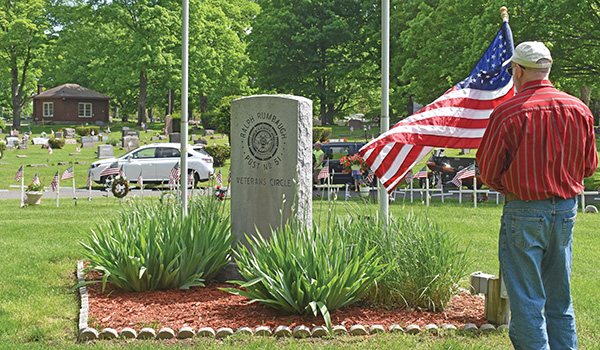 BUCHANAN — Right at 11 a.m. Monday, Buchanan resident Greg Hines stood surrounded by a circle of short, white crosses inside Oak Ridge Cemetery’s Veteran’s Circle. In one hand, he held an American flag, its red and white stripes waving with the day’s soft breeze. In his other hand, Hines clutched a crinkled paper containing an email he had printed off the day before. Hines carefully read each word on the page aloud as a small group of family members stood before him.

“It’s a sacred day to all war veterans. None need to be reminded of the reason why Memorial Day must be commemorated, but what about the general public?” Hines read, quoting a 2010 article written by former Veterans of Foreign Wars National Commander Thomas Tradewell. “Do most non-veterans really recognize the importance of May 30? Judging by what Memorial Day has become — simply another day off from work — the answer is a resounding ‘no.’ Perhaps a reminder is due then. And it is the duty of each and every veteran to relay the message.”

Though Buchanan’s Memorial Day parade and ceremony were canceled due to the COVID-19 pandemic, Hines decided to host a service of his own at the cemetery. Hines is not a veteran himself, but both his father and father-in-law were, which he said instilled in him a deep respect for veterans and those who have given their lives in service.

Because of this respect and a long-standing family tradition of taking part in Buchanan’s Memorial Day activities, Hines said he was moved to host some form of remembrance in honor of Memorial Day, even though large gatherings have been banned in the wake of COVID-19.

“This was really an impulse I had when I was forwarding the email I just read,” Hines said of why he decided to host a Memorial Day ceremony. “I decided I would stand in the circle with a flag. Even if I was alone, I would be doing something to remember the reason for Memorial Day and all the people who have given their lives for our freedoms.”

Initially, Hines assumed he would stand in the Veteran’s Circle by himself, but said he was happy that a few of his family members were able to join him, adding that it meant a lot to him that they came.

“I will remember this for a long time,” he said.

One family member who could not be with him Monday was his daughter, Susannah Miller, of North Carolina. She said her childhood is filled with memories of the Buchanan Memorial Parade and her father’s respect for those who serve in the military.

“My dad is committed to still honoring those who have given their all to maintain our freedoms in this great country,” she said. “Greg Hines may not have ever personally fought a battle to defend our country’s freedoms.  But he is fighting a battle now to hold in remembrance those who gave all.”

“I don’t want anyone thinking we are special,” he said, standing next to a gravestone decorated with a small flag. “We were not the only people out here today. There were families here. The American Legion and VFW were here and do so much year-round. … We are here because we feel it is the right thing to do.”

Though Memorial Day has now passed, Hines said he believes Americans should still take the time to remember the holiday’s true meaning.

“It’s a choice people need to make to make this a priority, which shouldn’t be hard,” he said. “Even if you remember in your own private place, that is still meaningful. Just don’t forget.”

NOVAK: It is time to rally the troops to fight COVID

Usually, in this space, I write about sports that have happened, or about to happen, or about something special that... read more