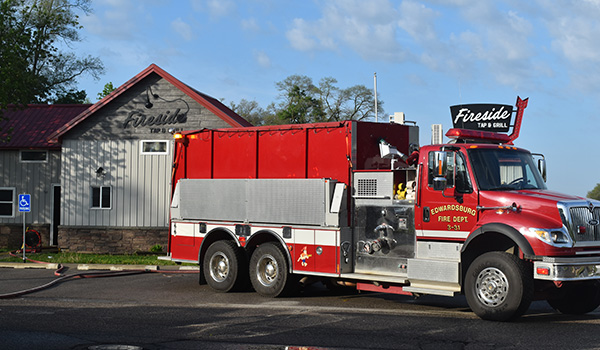 EDWARDSBURG — A popular Edwardsburg eatery was damaged in a structure fire Sunday.

The Edwardsburg Fire Department was dispatched to Fireside Tap and Grill, 69245 Maple St., Edwardsburg, just after 6 a.m. for a fire in progress. According to Assistant Fire Chief Paul Harris, when firefighters arrived on the scene, they were met with heavy smoke. Within 30 minutes of units arriving, the fire was under control.

At the time of the fire, the building was locked, and no one was inside.

The fire was contained to the inside of the building, but as of 9 a.m. Sunday, the fire’s cause, the room in which it originated, and the extent of the damage were unknown.

“We think there was a fire that worked its way out,” Harris said. “The building is still standing, but there is a lot of damage on the inside.”

According to Harris, a routine fire investigation will be conducted to determine the cause of the fire.

Owner Jeremy Yoder said he was alerted to the fire around 6:30 a.m., and as of 9 a.m., he had not been allowed inside the building. As the extent of the damage is unknown at this time, he said he cannot say how the fire will affect Fireside’s business or when he might be able to open.