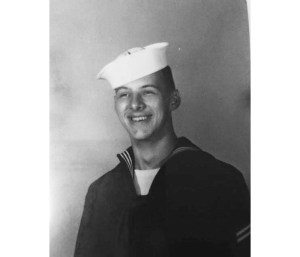 A celebration of life gathering will be at a later date.

Memorial contributions in Gerald’s name may be made to the Cass County Humane Society. Those wishing to leave an online condolence may do so at clarkch.com.

Arrangements have been entrusted to Clark Chapel and cremation Services.

He graduated from TF North High School in 1954 where he played football as an offence center. After high school, he joined the U.S. Navy and proudly served his country on the USS SARATOGA (CVA-60).

Over the years, he worked a few different jobs, he was a police officer for Thornton Township, in Illinois, and worked for Honeywell in Lansing, Illinois for many years.

Gerald had a love for the outdoors. He loved to visit the Upper Peninsula of Michigan, especially the Porcupine Mountains. The “Porkies” were one of his favorite places; back packing and fishing on The Lake of The Clouds and Mirror Lake. He would fish the lakes with his favorite lures; the “Buzz” bait or a “Lindy Rig.” He also had a commitment as a Cub Master and a Scout Master.

After moving to Michigan in 2008, Gerald and his wife, Dee, enjoyed going to the “Corner Cafe” (now known as Sweet Thangs), where they were treated like family.

Buz loved the biscuits and gravy there; grilled biscuit and add strawberry jelly.

In his spare time as he aged, he enjoyed watching re-runs of game shows, feeding his birds and doing word searches. Gerald had a love for all animals; he was very fond of his pets. Most of all, he loved spending time with his family, which included his many “adopted kids” (John’s friends). He loved his daughter Cathy; the love of his son’s life. His best friend was Ted Kuzniar and although they lived far apart they would talk often on the phone.

Gerald is survived by his son, John (Cathy) Burczyk; grandchildren, Rachel Lindemulder, Jon (Alyssa) Lindemulder and Nick (Brei) Lindemulder. He was preceded in death by his parents; and wife, Dolores Burczyk.

Janice Carden, 85, of Niles, passed away on Wednesday, May 20, 2020, at Lakeland Hospital in St. Joseph. Arrangements are... read more