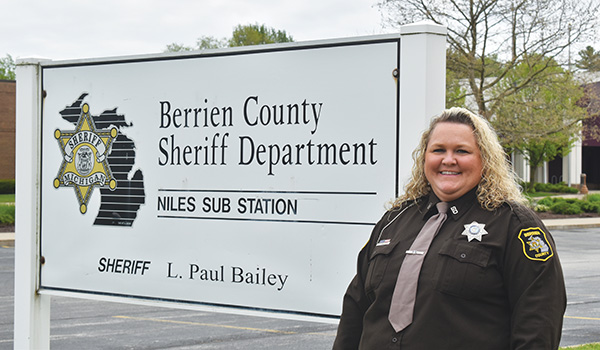 During the COVID-19 pandemic, it has shown. She has been ready to adapt to the changing needs of the community since the county’s state of emergency was declared in late March.

Working in the Crime Prevention Department, she is a R.A.D. (Rape Aggression Defense) System officer. She works with Project Lifesaver and schools. She serves on the Buchanan Community School board, and she grew up in Buchanan. Her son is the fifth generation of her family to live in the Buchanan community.

Laesch is accustomed to doing a little bit of everything.

As the deputy in the department’s crime prevention office, Laesch’s schedule completely changed when COVID-19 mandates shut down the places that she would generally find herself. No longer working her usual circuits, Laesch has been finding herself working elsewhere in the county: at the Berrien County Health Department.

“Every day we were talking and meeting,” Laesch said of the crisis team. “I am in charge of our Facebook page, and I would see all these messages we were getting when the executive orders would come out. We would get hit with messages, calls and confusion.”

“The health department was getting a lot of calls too,” Laesch said. “They were still getting executive order questions, questions about who is essential and who is not essential — so they needed that law enforcement piece.”

Laesch took on the task.

“That’s our job: to enforce the laws coming down from the governor,” Laesch said. “It was just more understanding, guidance and education getting it back out there.”

In the Berrien County Health Department’s call center, Laesch often took the calls for and about senior citizens. She helped educate those that called in, and with the health department, put together information to distribute to the seniors living in areas where they might not have access to information they can understand.

“We put a flier together and got that information out,” Laesch said. “We had to educate at a third-grade level because some people cannot read. We got them all on the same page and got the basics down.”

Laesch also helped distribute soap, toilet paper, face masks, shampoo, conditioner and other items of basic needs to people who did not have the funds or ability to get to the store to residents in a senior high rise in Benton Harbor.

Every day, as executive orders and guidance from governing authorities changed, Laesch was at the call center working alongside the health department to help address the questions pouring in from the community during each change.

Her experience as an officer gave her a unique ability to help talk to callers who might be experiencing anxiety and anger from their fears.

“Their anxiety increased,” Laesch said. As an officer, she has been through Crisis Intervention Training. “It’s like mental health first aid. Our CIT is for law enforcement.”

Armed with that knowledge and training, Laesch worked with Gretchen Carlson, supervisor of the Riverwood Center’s Jail Diversion.

“She’s amazing help,” Laesch said. “I called her and asked for her contact, and what to do to help people. At the health department we were getting a lot for stress, anxiety, mental health calls, and these aren’t even the people who were at Riverwood. It was just the general stress of the situation.”

Working through the calls, and addressing the concerns of those who had become mentally or emotionally overwhelmed, became a point where she was able to assist the most.

Laesch’s extensive work in the crime prevention department, and embedding into the health department with the call center, she could help begin connecting even more people to the information they needed.

As executive orders continue to shift, Laesch is working every day with the sheriff’s department to make sure people are getting the clarifications they need. With numbers of COVID-19 positives still rising, her concern is for safety.

“We are going into a busy holiday weekend,” Laesch said. “We want to emphasize social distancing. If you’re going to go out, try to just do it with your household.”