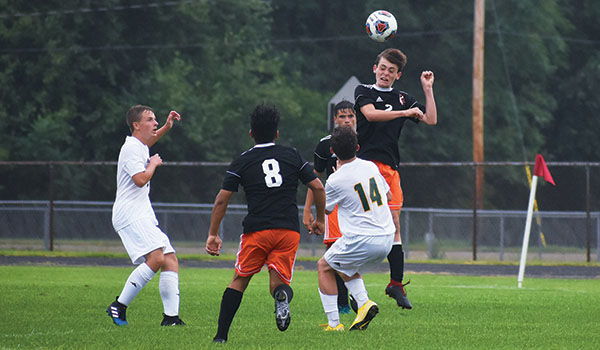 Fall sports such as soccer are awaiting to hear whether or not there will be a 2020 season. The MHSAA is set to release guidance for re-opening sports next week. (Leader file photo)

MHSAA set to release guidance for opening up sports next week

NILES — A lot of questions have been raised since the Michigan High School Athletic Association suspended winter sports and ultimately canceled spring sports due to the COVID-19 outbreak.

The one that keeps coming up as the weeks go along is: will there be sports in the fall?

While that question was not definitely answered by the MHSAA on Friday, there was reason for hope as MHSAA executive director Mark Uyl sent an email to all member school athletic directors saying that next week the state would be releasing a plan to begin sports in the future.

Calling it the “MHSAA Guidance for Opening School Sports,” the plan is a collaborative effort between the MHSAA, the National Federation of State High School Associations, as well as the MHSAA’s and NFHS’s sports medicine advisory committees, health professional and school administrators.

Spring sports were officially canceled on April 3. Since that time, the future of high school sports in Michigan has been in limbo as Gov. Gretchen Whitmer issued a stay-at-home order, which has been extended twice. It is currently set to expire on May 28. Whitmer said she might extend it again despite allowing groups of 10 or less to start gathering as of Thursday morning.

According to Uyl’s email, “next week, the MHSAA will be providing a comprehensive update that will include further guidance from state government and health department officials, along with the document ‘MHSAA Guidance for Opening School Sports’ that will assist schools with procedures and protocols as we transition into summer activity when permitted by Governor Whitmer.”

He went on to say that he hopes more definite details will be available next week with the current state of emergency order set to expire on May 28, which may or may not be extended.

“The one thing we have learned over the past nine weeks is this continues to be a fluid situation, and we simply wanted to alert you that further details and the guidance document will be coming to you by May 29,” he said.