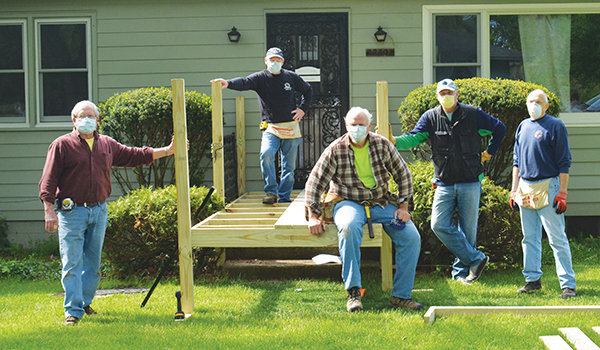 EDWARDSBURG — Stuart Street in Edwardsburg was alive with the hum of table saws and the uneven taps of hammers Wednesday morning. Over the chorus of noise, one of the crew called out from the porch of a home on the street and worked to properly install a frame of fresh pine over the porch’s concrete steps.

Wincing into the morning sun, project lead Ray Phillips adjusted a cloth mask over his face before walking across the lawn’s plush green grass to investigate the issue.

“A lot of times, adjustments need to be made because every project is different,” he said. “You have to make the design to work for the person and meet their needs.”

The Cass County Council on Aging’s Handy Helpers are officially back to work after Gov. Gretchen Whitmer announced construction would be allowed to resume earlier this month. The announcement came after construction was halted in March due to the outbreak of COVID-19.

“I am glad we are able to be back doing this,” said organizer Leslie Vargo. “We are outside, so we are staying safe and happy to be back helping the community.”

The Handy Helpers is a volunteer group run by the COA. The group designs, constructs and installs outdoor, handicap accessible ramps for homebound seniors in Cass County. All projects are completed at no cost to the homeowner. Last year alone, volunteers installed 36 ramps.

Wednesday’s ramp build marked the second ramp built since construction was allowed to resume following COVID-19 mandates. During the shutdown, Phillips said the program received more than a dozen requests for new ramps to be built. Now, he said he and the rest of the Handy Helpers crew plan to fulfill those requests.

“We will probably do 30 more of these before the season is done,” Phillips said. “We are just excited to get back to work.”

For many of the Handy Helpers’ senior clients, the ramps volunteers install can change their lives. A ramp that a wheelchair can easily traverse can offer some seniors freedom and the ability to go outside of their homes.

“Many people don’t have any other option,” Vargo said. “Right now, with the virus and everything that is going on, we can at least offer them a way to get outside and enjoy their yard.”

Often, Vargo and Phillips said homeowners are grateful for the ramps installed by the Handy Helpers. At the first ramp installed earlier this month, Phillips said the recipient provided the crew with homemade facemasks as a thank you. At other ramp builds, Vargo said the seniors were moved to tears.

However, though Phillips said he appreciated being appreciated, it was not why he continues to volunteer with the COA. Instead, it is knowing that he helped someone in need that offers him a sense of satisfaction with every ramp built.

“If you can help someone, you should do what you can to help them,” he said.

With construction opened back up and sunny days on the horizon, both Phillips and Vargo anticipate being able to help many seniors by installing ramps before the summer is over. To help make that happen, the Handy Helpers program is currently seeking volunteers.

“We can always use all the help we can get,” Vargo said. “Without our volunteers, no one this could happen.”

MHSAA set to release guidance for opening up sports next week

NILES — A lot of questions have been raised since the Michigan High School Athletic Association suspended winter sports and... read more