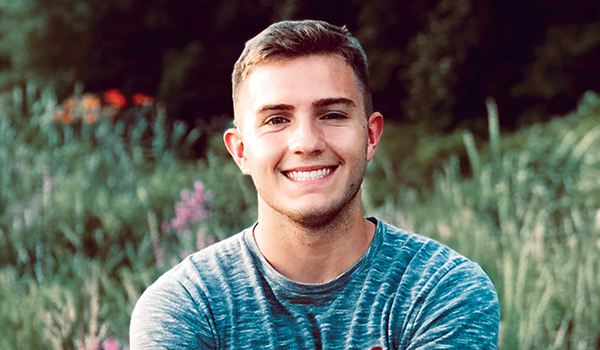 CASSOPOLIS — Senior Owen Gardner, of Cassopolis, did not know Robert Freeze, but his mother, Tammy Gardner, went to school with him.

Using the memories that his mom shared with him, Gardner was able to write the winning essay for the Robert Freeze Memorial Scholarship through One Good Deed Michiana. He also received one of four scholarships, according to Allison Hayes Freeze-Shelton, the widow of Robert Freeze.

“I knew his mom, Tammy, had gone to school with Robert, so I had mentioned to her a couple of years ago that when Owen was a senior, he should apply for the scholarship,” Hayes Freeze-Shelton said. “So, this year, he was the first one to reach out to me, probably like in February. He was wondering if we still had it and if he could apply for it.”

Gardner not only took the initiative by contacting Hayes Freeze-Shelton, but wowed her with his application and essay.

The scholarship was created on behalf of Freeze to help college-bound students. According to Hayes Freeze-Shelton, the applicants do not have to be at the top of their class. They just need to reflect what Robert stood for.

“What I like to do normally, I do not look for a 4.0 National Honor Society kid because that is not what Robert was. He got good grades, so I want it to be for a kid who might not think they qualify for a scholarship, but is a hard worker, blue-collar and balances school work with athletics a part-time job. He is a leader by example. Those are the biggest things I look for. Owen checked all of those boxes, and on top of that, he is a National Honor Society kid and had a 4.1 GPA on a 4.0 scale. He really knocked our socks off.”

Gardner said that listening to his mom talk about the type of person Robert was inspired him to apply for the scholarship. It also helped him write his first-place essay.

“My mom actually new Robert herself, so she told me what the foundation of the scholarship was all about,” he said. “I found out what kind of a person he was and it really spoke a lot to me. He was a quiet leader and very respected for it. It felt great to win it. It is such an honor to have that name behind you as a scholarship.”

Here is part of what Gardner said in his essay: “My mom told me that Robert was quiet but had a strong presence. He didn’t say much, but what he did say carried weight. … It sounds to me that Robert was a self-motivated, quiet leader that loved his family deeply. I am also a quiet leader. I choose to lead by example instead of by words. … I do everything I can to help my classmates and teammates, encouraging them or giving advice along the way, even giving them the shoes off my feet. I will go to war for anybody I love and by the sounds of things, Robert was the same way.”

Robert worked for American Electric Power. Since the scholarship’s inception, it has always been opened to all the families of AEP. Hayes Freeze-Shelton said that this year there were no applicants with a connection to the company.

The scholarship uses a sliding scale when it comes to the amount awarded.

“It depends on how many kids who qualify, apply and win,” Hayes Freeze-Shelton said. “I do not want to turn down anybody who is awesome, and if we can make it happen, we do. So, so one year we may only have one winner and they get $1,000. The following year we might not have any winners because they do not meet the criteria. I am not going to give it out to just anybody because it means something to us.”

Originally, funds were raised through hosting a summer golf outing. According to Hayes Freeze-Shelton, that became so big, she had a hard time managing it.

For the past couple of years, scholarship money has been raised through a couple of One Good Deed concerts. The concerts, while not as highly attended as the golf outing, have been successful.

Unfortunately, due to COVID-19 pandemic, hosting a couple of concerts may not happen, Hayes Freeze-Shelton said.

EDWARDSBURG — Stuart Street in Edwardsburg was alive with the hum of table saws and the uneven taps of hammers... read more