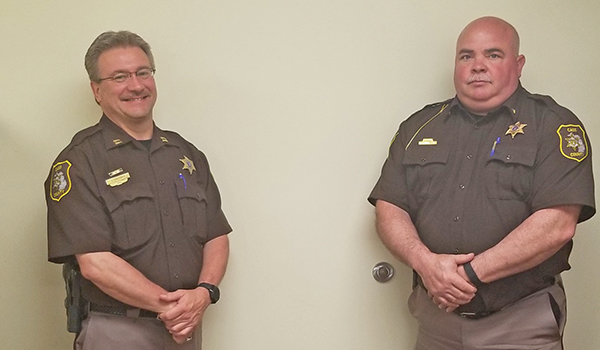 CASSOPOLIS — On a Thursday in March, Captain Tom Jacobs of the Cass County Sheriff’s Office went home early from work with mild flu symptoms. By Monday, he was ill with “the worst flu symptoms [he] had ever had in his life.”

However, he did not have the flu. He had tested positive for COVID-19, and by Wednesday, he was hospitalized and put on a ventilator due to breathing issues. He remained there for five days.

“As I have COPD [chronic obstructive pulmonary disease] and have issues breathing anyways, I was very concerned,” Jacobs recalled. “Given how little was known about coronavirus at the time, I was scared.”

Not long after Jacobs got sick, his coworker, Cass County Undersheriff Clint Roach, tested positive for the coronavirus. Though his case was not as severe as Jacobs’ and he was never hospitalized, Roach said the virus took its toll.

“I lost my sense of taste and smell, and I had some breathing issues,” Roach said. “I still have a little bit of fatigue, but other than that, I am feeling fine now.”

In the weeks since their positive diagnoses, both Roach and Jacobs have recovered and are “back to feeling normal. Now, they are helping others who have contracted the virus.

The Cass County Sheriff’s Office employees recently donated plasma to help those who have tested positive for COVID-19 fight the virus. According to the U.S. Food and Drug Administration, those who have contracted and recovered from COVID-19 have antibodies in their blood that boosts the immune system to fight off the virus and could help others if donated. As soon as Roach and Jacobs learned this information, they contacted the Van Buren/Cass District County Health Department for the nearest locations and were assisted in obtaining necessary paperwork to meet the requirements for donating their blood plasma.

“Knowing what I went through, I want to do everything I can to help someone else going through that,” Jacobs said. “In my line of work, the job is to serve the community. I think you can help someone, you should do so, and in this case, it was without much effort.”

“I’m glad I was able to do that,” Roach added. “I thought this could help people who had more severe cases than I had.”

Roach and Jacobs were two of three Cass County Sheriff’s Office employees to test positive for COVID-19. Sheriff Behnke said COVID-19 caused his office to change its operations and introduce more stringent social distancing and sanitation procedures. While he said it was a learning curve, he is happy and relieved to report that all three of the employees who initially tested positive for the virus are recovered and back to work. No other employees and no jail inmates have tested positive.

Behnke said he wanted to recognize and thank all of the staff at the Cass County Sheriff’s Office, as well as all of the doctors, nurses, healthcare workers and the essential work employees that have taken the pandemic on and continued to provide services that are needed to sustain essential needs.

“It is individuals like our undersheriff and captain that are willing to go above and beyond the call of duty to help protect and help those they serve that are in critical need of the antibodies they have built up in their own immune system,” he said. “Thank you to all our Hometown Heroes here at the Cass County Sheriff’s Office and southwest Michigan for giving a little extra during this time of need.”

However, Roach and Jacobs said donating their plasma was simply the right thing to do. As soon as they are able, both plan to donate again.