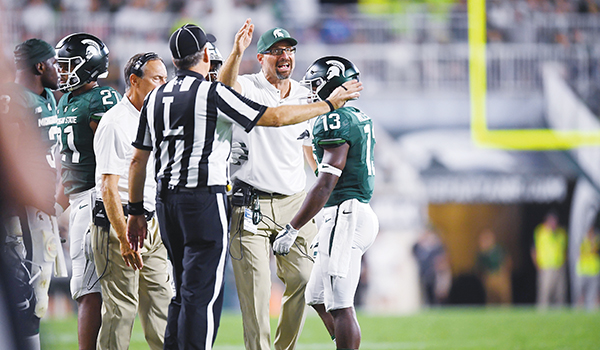 LANSING — Dowagiac native Mark Staten grew up listening to stories of his grandfather, who was a World War II and Korean War veteran. The stories detailed his grandfather’s time aboard the USS Saratoga in the Pacific.

Now, the former Michigan State University offensive assistant coach is using his grandfather’s stories as motivation to partner with Soldiers to Sidelines, a nonprofit with a mission to provide a path for former and current military members to transition to coaching through training, development and networking in the world of athletics.

Staten, who is currently not associated with a program, knew of Soldiers to Sidelines through his former Miami-Ohio coach, Randy Walker.

“The Randy Walker Foundation was a big contributor of Soldier to Sidelines,” Staten said. “Back in January, I was at a coaching convention, and a mutual friend introduced me to Harrison Bernstein. He runs the ship.”

Bernstein started Soldiers to Sidelines in 2015.

“We see the football side of it, but they’ve had lacrosse clinics and different sport clinics,” Staten said. “It’s not just jump on the field and start to coach. There are methodologies and things of that nature. They are always seeking a way to help.”

Staten said he partnered with the organization after planning a Zoom Communications call with Jeff Duvendeck, the head football coach at Lawrence Technological University, and Scott Wooster, the offensive line coach at Wayne State University.

“We were doing a Zoom clinic with some friends,” Staten said. “In the offensive line world, you have a lot of friends out there, and we were just going to talk ball but do it on a Zoom meeting.”

Staten, who had a connection with Bernstein, suggested the group of offensive coordinators give back to athletics and help benefit servicemen.

Staten said the group had its first clinic with Butch Berry, of the Green Bay Packers and Mike Cummings, of Central Michigan University, along with himself.

Last week, the group included Joe Rudolph with the Wisconsin Badgers and Kurt Anderson, the offensive line coach at Northwestern University. The half-hour panel had 20 coaches from varying college levels.

Discussions surrounded different types of plays, issues and offered advice that helped each of the individual coaches.

“They do other clinics, but this has been their most popular clinic so far,” Staten said. “It feels really good seeing as I am not associated with a program right now to just be helping and giving back and still coaching in the way I can coach.”

Staten said, in some ways, football and the military are similar. They both require great leadership, following the command of upper leadership and how everything trickles down.

“The military is a team and members of the military are some of the greatest teammates that are out there,” he said.

Staten plans to continue to be involved with Soldiers to Sidelines and with the Michigan High School Athletic Association.

“When I get my next job, I am still going to be 100 percent involved,” Staten said. “It’s important that we do something for these servicemen who have given so selflessly back to us. This is my way of giving back.”