A celebration of life gathering will be hosted privately at a later date.

Memorial contributions in Debbie’s name may be made to the Cass County Cancer Services.

Arrangements have been entrusted to Clark Chapel and Cremation Services.

Debbie was born April 1, 1959, in Dowagiac, to Donald Haley and Lois (Gillespie).

She graduated from Dowagiac High School in 1977. 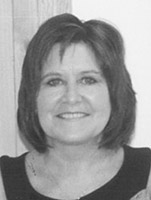 Debbie worked for Ameriwood Industries in Dowagiac for more than 30 years. While working at Ameriwood, she met the love of her life Alan Lewandowski, they were united in marriage on May 8, 1992.

Debbie was known as a quiet and kind person. She enjoyed crafting, painting and going camping. Most of all, she loved spending time with her family.