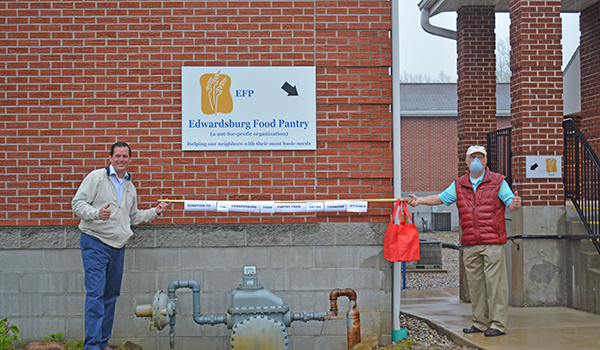 ONTWA TOWNSHIP — Under a blanket of rain Thursday morning, Ontwa Township trustees Jeff Kozinski and Jerry Duck stood outside of the Edwardsburg Food Pantry, each holding one end of a 6-foot pole to maintain proper social distancing.

A red bag containing several unmarked envelopes was looped around one side of the gold-painted pole, while the center was taped with notes that read “donation to the Edwardsburg Food Pantry from Ontwa Township officials.”

“That’s a large donation for the food pantry. That’s a big donation for us,” Scheel said. “That is an impressive amount to raise.”

Kozinski said the donation stemmed from elected officials’ desire to support the food pantry during the COVID-19 pandemic. Initially, trustees discussed donating a set percentage of their trustee salary. However, officials decided to submit anonymous donations so that no one felt pressured to give any specific amount.

The donations extended beyond the Ontwa Township Board of Trustees, and officials from many of the township’s boards, including the wastewater and the zoning board of appeals, were invited to participate.

“We just asked for a generous donation, and I believe we accomplished that,” Kozinski said. “Everyone knows that this is a terrible time right now, and we are trying to stick together as a community.”

“We thought this would be a good thing for our elected officials to do,” Duck added. “This is a very trying time that we hope we never go through again. … We live in a very giving community, and we are proud to be a part of that.”

Scheel said the donation would be helpful to the pantry, now more than ever, as the pantry has been asking people to make monetary donations rather than donate food items due to sanitation concerns surrounding COVID-19. Scheel also said the money is needed as the pantry expects to see an increase in visitors in the summer due to a rise in unemployment.

Scheel said he was grateful to Ontwa Township’s officials for the donation to the Edwardsburg Food Pantry, saying that he anticipated it would help many community members.

“This is great leadership,” he said. “This is a great way to lead by example for the rest of the community. They looked at where there might be a need and helped out.”

By HANNAH HOLLIDAY hannah.holliday@leaderpub.com DOWAGIAC — Despite reported meat shortages during the COVID-19 pandemic, one local farm market and an... read more