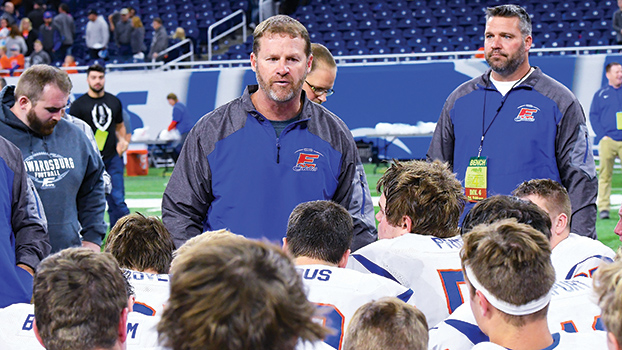 Kevin Bart, of Edwardsburg, said he was a bit surprised that the Eddies ended up in Division 3 for football. (Leader file photo)

Football coaches like knowing what division they are in

EDWARDSBURG — For the first time since 1998, area football coaches will know what division they will be in before the start of the season.

The second-semester count decided those eight divisions of 11-man football on Feb. 12. Schools were divided into eight equal divisions based on student enrollment.

According to the Michigan High School Athletic Association, 752 schools are tournament-qualified.

In southwest Michigan, here are where the schools were placed:

Edwardsburg has bounced back and forth from Division 3 and Division 4. Veteran Eddies’ coach Kevin Bartz did not think his team would wind up in Division 3, but knowing in advance allows the Eddies to prepare accordingly.

“I was a little surprised that we ended up in division 3 for the 2020 season,” he said. “Based on our second-semester student count, and the cutoffs for the divisions in 2019, I thought there was a pretty good chance we would be in Division 4.

“Knowing that we are in Division 3 lets us know that we have to prepare to compete against some of the most athletic, talented and best teams in the state of Michigan,” he said. “We have been a ‘bubble team’ for the past five years sitting on the edge of Division 3 and Division 4. There is no projecting or guessing anymore, which is nice.”

“The road to Ford Field in Division 3 is very tough,” he said. “There are several former and recent state champions from Division 2, 3 and 4. Perennial powerhouses such as Muskegon, Detroit King, Orchard Lake St. Marys, River Rouge, DeWitt, Zeeleand West, Zeeland East and Chelsea are just a handful of the outstanding programs that occupy the Division 3 bracket. Local programs that have been successful include St. Joe, Lakeshore, and Coldwater. I believe that Division 3 may be the toughest division in the state, followed closely by Division 5.”

According to second-year Buchanan coach Mark Frey, the Bucks are exactly where they were expected to be.

“We weren’t surprised by the division we were placed in, but it was interesting to see the schools around our size,” he said. “This placement doesn’t really change anything in our preparation. We realize that our focus needs to be on us getting better every week, and the playoff will take care of itself if we are doing what we are supposed to do. I would say the only advantage this placement gives us is if we can get some more points from playing teams that are larger than us. Otherwise, I feel we were placed accurately.”

In eight-man football, the MHSAA placed a hard enrollment cap on the schools. All schools with 215 or fewer students will be eligible for the state tournament.

The following schools will be playing eight-man football in 2020:

Bridgman will not be eligible for the postseason again this year, as the Bees’ have an enrollment of more than 215 students.

Re-opening is the key word in sports at all levels right now. Every day, there are new projections for when... read more