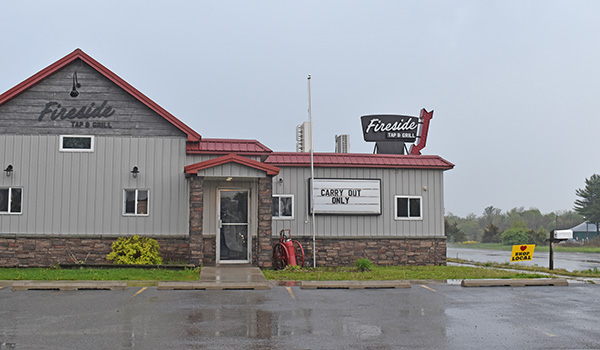 EDWARDSBURG — As loyal customers of Fireside Tap & Grill mourned the loss of the popular Edwardsburg business Thursday, owner Jeremy Yoder had good news to share: the closure is only temporary. The business will reopen Monday — with a few changes.

An article published by Leader Publications Thursday reported that employees were notified via text message earlier in the week that they were to return to work at minimum wage, as the business was awarded the Paycheck Protection Program. Employees Vonda McKay, Alexis Rochelle Ryman and Wendy Nichols-Johnson said the next day, they were told they did not have jobs to return to.

Thursday evening, Yoder said the furloughs were a temporary solution as he and other Fireside leaders take time to restructure the restaurant’s menu to accommodate meat shortages.

“What we decided to do was send our employees to unemployment, which is the quickest way for them to keep money coming in,” Yoder said.

Adapting to a new climate

Fireside Tap & Grill, located at 69245 Maple St. in Edwardsburg, is a sports bar specializing in burgers, pizza, wings and pitchers of cold beer. Prior to mandates ordering restaurants to close, the restaurant was often filled with people watching live sports, playing trivia and enjoying family dinners. In recent weeks, the restaurant has been limited to takeout service, leaving barstools empty in spite of loyal customers who have continued to frequent the restaurant.

Yoder, who also owns Chubbies Pub and Grub in Syracuse, Indiana, is one of countless restaurateurs who have worked to ride out a storm of challenges presented by efforts to mitigate the spread of coronavirus. His restaurants — like restaurants across the country — have adjusted to mandates closing dining rooms, new requirements relating to masks, cleaning and social distancing, and shortages of meat and other staples necessary to serve customers.

“In the situation we’re living through, nobody knows what the new norm is,” he said. “We’re trying to figure this out day by day.”

Yoder said the decision to furlough employees was a direct result of being unable to get the supplies needed to run the restaurant as it has been run for more than a decade. When he learned his meat supplier did not have pork available for this week’s shipment, he decided it was best to close the business’ doors as he and other restaurant leaders reshaped the Fireside menu.

“We’re having huge problems with our supply chains,” he said. “They don’t have any product — no pork. That’s our Sunday special. Ninety-nine percent of our business Sunday is pork tenderloin. We know we have to make some drastic changes to how we do business.”

Though employees were under the understanding that Fireside’s closure is permanent, Yoder wants to assure customers that Fireside will be back in business by Monday or Tuesday.

“We plan on the first of the week getting going again — on a limited menu,” he said.

Yoder said that of the approximately 40 employees who work at the restaurant, all were laid off during the temporary closure. However, many were laid off several weeks ago.

“We already had a bunch of them on unemployment. We gave them the option of whether they wanted to work,” he said. “We directed them to employment eight or nine weeks ago.”

Yoder confirmed that Fireside was awarded PPP funding, but that many employees preferred unemployment checks, which allowed them to make more money than they were able to earn as the restaurant’s traffic has significantly decreased.

“People are calling my head for taking a loan and closing, and that’s just not the case,” he said. “It’s not like I’m a thief. We’re pretty reputable.”

Contrary to information shared by staff Thursday, Yoder said furloughed employees will be called back as business needs demand.

“It’s not like we just boarded up and packed up and left town,” he said. “Once we started seeing prices — low quantities and high prices, we made the call. … We didn’t hop on Facebook. We didn’t try to post that we were closing on Facebook — we tried to handle it quietly, and unfortunately quietly did not work.”

Yoder confirmed that Fireside is for sale, and has been since before the virus. In a text message Thursday night, Yoder said, “my daughter starts high school this coming fall. She plays sports (volleyball, swimming, etc.) and I am a sports junkie. I have missed all of my children’s sports [through] elementary and middle school.”

Yoder said listing the business opens the potential for him to enjoy more time with his family, which lives an hour from Edwardsburg, but the decision was unrelated to the virus.

“The decision to list the business was because I wanted to be Dad,” he said. “And my employees knew the reason I listed it. I have lost a lot and gave a lot to Fireside.”

As the economy reopened in Indiana this week and restaurants were permitted to open dine-in service at 50-percent capacity, Yoder said he was optimistic that business would begin turning around at Chubbies.

“We were all excited about that 50 percent, and boy were we disappointed,” he said, explaining that the limited capacity is not enough to make ends meet. “Michigan’s about — they’re going to be two months behind Indiana, and 50 percent is not looking good.”

Nonetheless, Yoder said Fireside is not going anywhere. The changes happening at the restaurant are meant to keep the business open through trying times, until business returns to usual.

“By no means is this a financial problem or anything like that,” he said. “We’ll be back. We’ve just got to get a hold of this thing.”