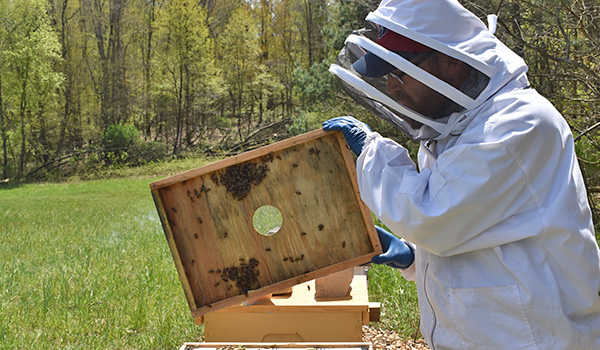 After countless hours of reading, researching and watching YouTube videos, last year, Schrader decided to start beekeeping as a hobby. During the search for clubs where he could learn more about the flying insects, he met his mentor, Brad Cloutier, of Decatur, who has been involved in beekeeping extensively.

The pair started discussing the region’s need for a bee club. In July 2019, they created the Facebook group, Berrien/Cass Beekeepers and hosted their first club meeting that fall.

The club merges hobby beekeepers and beekeepers involved in commercial beekeeping. Schrader said one club member, a high school student, works for a commercial beekeeper in Eau Claire and offers valuable insight to other members. Currently, the club has about 12 paying members. Membership fees are $25 per person or $40 for a family or household. Dues cover the costs of speakers and other educational tools; however, the club is free to high school and college students. Currently, the club is seeking to increase its membership.

The club is involved with Southwestern Michigan College, and when a pandemic is not going on, uses a classroom space on the third Tuesday of every month to host presentations and guest speakers to discuss bee related topics and provide education. When social groups are allowed to meet again, Schrader said the hope is to bring people together who have never worked with bees before to learn more about the creatures.

“Southwestern Michigan College has some hives on campus, and we are going to try to use them as our hive apiary,” he said.

Schrader, who also works at Schrader Tree Farm and has a degree in biology and an occupation in contract work, said he learned a lot about beekeeping in his first year of the hobby. However this year, he hopes to do things differently.

“It’s always better to get two hives to start off with which is something I didn’t do and learned from that mistake,” Schrader said during a routine inspection of one his two hives. During the spring and summer months, he checks the hives every seven to 10 days. “You can kind of compare and contrast the two hives to see how they are doing.”

As Schrader smoked the front of the hive to calm the bees, they began to eat honey. He removed the outer cover and removed a frame, revealing a queen bee marked with a blue dot on her back and some bee eggs.

The inspection inspired Schrader to discuss queen-less bee hives and how bees adapt.

“There is one queen, and the bees can make another queen just from the way they can form an egg,” he said. “They can form a cell in a different direction, and it can form a queen. If they need to replace an old queen, they can do that if they have eggs available. If you have bees, it’s easier to make more hives too.”

Members of the Berrien/Cass Bee Keepers Club are on the lookout for ways to safely transport bees. Last year, Schrader and Cloutier relocated a swarm under someone’s deck in Lawrence. They also removed a hive that had formed inside a wooden post on someone’s porch.

Honey bees, both wild and domestic, play a role in the world’s food supply. According to greenpeace.org, bees pollinate about 70 out of the top 100 human food crops which supply about 90 percent of the world’s nutrition.

“I don’t think people know that much about bees, but it seems like interest has peaked,” Schrader said.

Schrader decided to purchase package bees this year after losing his bees last year due to a bee keeping error. Packaged bees are raised in hive and then put into boxes. A queen is added and shipped with sugar water.

Schrader said prices for both options range from $125 to $200 for developed nucleus colonies. Beekeepers also have to buy equipment to protect themselves and then hope their new bees will survive southwest Michigan’s unpredictable winters.

“My goal this year is to have bees live through the winter,” Schrader said. “Instead of being a bee haver, I will be a bee keeper.”

As temperatures start to warm up and dandelions begin to appear, June marks the southwest Michigan beekeeper’s peak month for honey flow. By the end of June or mid-July, honey season is almost over, Schrader said.

As he carefully inspected more frames filled with honey bees and new eggs, Schrader said he believes bees are some of nature’s coolest creatures. His hopes club members will continue to learn together. Just like how Schrader found his beekeeping mentor in Cloutier, he hopes a similar mentor program can connect seasoned bee keepers with brand new bee keepers.

“The only way you are going to learn is by being around the bees,” Schrader said inspecting the final frame. “You can only read so much stuff.”