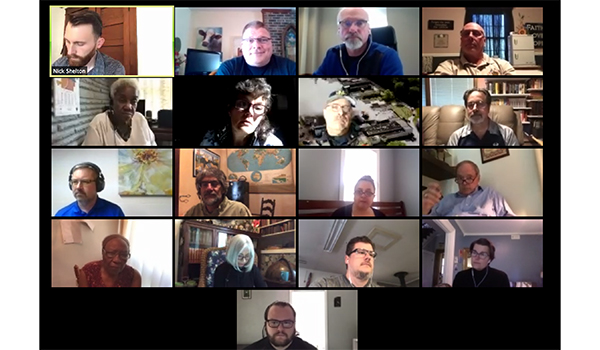 NILES — The question of freedom was at the top of the Niles City Council’s agenda Monday evening.

What began as a request to alleviate pressure from the strained, smaller staff of the city administration due to budget cuts and layoffs made as COVID-19 mandates continue to affect residents and municipalities turned into a larger question for some council members.

The third item on the agenda at Monday night’s meeting was heavily debated for nearly half an hour of the hour-long meeting.

The item read: “Consideration to not accept any new event applications and to cancel previously approved events until social gathering is allowed by the State.”

Council member John DiCostanzo, of the city’s fourth ward, was vocal in opposing the item as written.

“I think we all have awareness of what’s out there,” DiCostanzo said. “We should all have the right and the freedom to make our own decisions on whether we want to participate in these types of activities.”

DiCostanzo went on to say that he would “rather not send a message to the community that we are closing the city down for events, indefinitely.”

“I’m really torn on this one, but given the nature of [Memorial Day], and what it’s supposed to be about, I think it’s just an injustice to say to our townspeople that on Memorial Day you can’t gather,” Bertschy said.

Further discussion of the matter called into question whether the city council could oppose the state’s current “Stay Home, Stay Safe” executive order, which limits gatherings to 10 or fewer participants. The current order expires on May 28.

City attorney Robert Landgraf Jr. affirmed that the executive orders were the law and was not sure what the legal ramifications of violating the orders would be as a city.

Council member Jessica Nelson of the of the city’s fourth ward went on to clarify the spirit of the executive order was not to limit freedoms, but to keep people safe from COVID-19.

“What we’re saying here, and the wording is a little bit vague on the item on the agenda, is that we are not going to take event applications until it is allowed by the state,” Nelson said. “It does bind us that there would be applications for events in October that we can’t review. I don’t like sending the message that we’re shut down, and we’re not taking applications for future events that are still an unknown.”

Nelson said that she was uncomfortable tying this request with limiting people’s freedoms, since the state’s law already made large gatherings unlawful during COVID-19 mandates.

Huff clarified that, due to layoffs and limiting of hours in the city administration, event applications were time-consuming to process. The “Stay Home, Stay Safe” executive order from the state of Michigan also limits gatherings to ten people or fewer. Huff also wanted clarification on how the administration should handle event requests at this time.

“We have drastically limited staff that processes this type of stuff,” Huff said. “People are taking on significant extra duties than what they are normally doing.”

Another discussion item that drew debate was the approval of application of calcium chloride to the city’s gravel and dirt roads. The annual treatment helps to settle dust from the roads as they are driven on for up to three months. The cost for the service is $7,999. The council voted six in favor, with DiCostanzo opposed.

The meeting had opened with time for public comment on the Community Development Block Grant Program Citizen Input Plan, where the Program Year 2019 Annual Action Plan would be put in response to the novel coronavirus. The item passed unanimously, with no public comment, and Mayor Nick Shelton was authorized to sign the documents needed.

Other items on the agenda included awarding the contract for the Riverfront Park South CDBG Blight Elimination to Treeworks, Inc. of Coopersville, authorizing a renewal of CAD software with Tyler Technologies of Troy and approving the contract for the installation of a pad mount 1000 KVA transformer for the Drive and Shine Project for T&R Electric Supply Co. Inc.

The council also voted to move the next city council meeting from Memorial Day, May 25, to next Monday, May 18.

DOWAGIAC — As the COVID-19 pandemic continues, the city of Dowagiac is beginning budget preparations for the upcoming 2020-2021 fiscal... read more