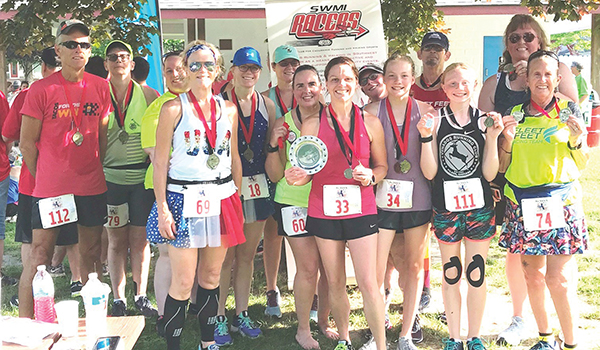 SOUTHWEST MICHIGAN — A running and walking group working to promote sports, while supporting local communities, has been navigating the new normal without in-person 5K and 10K races.

The Red Arrow Club for Endurance Running and Walking Sports is a nonprofit club affiliated with the Road Runners Club of America, a national organization. SWMI RACERS was founded in August 2012 and started off as a running club with members from Berrien Township, Berrien County, Van Buren County, Cass County, Kalamazoo County and northwest Indiana.

In April 2013, the group hosted its first 5K and started growing from there.

“We host events, provide race direction and partner with other events to promote them,” said President Marianne Groth. “One of the things that we do with us creating events is to help promote the sports of running or walking, while also supporting communities.”

Since the COVID-19 crisis began, SWMI RACERS has transitioned to trying to facilitate local nonprofit 5K races that are now being ran virtually. However, the pandemic has ended the group aspect of the sport for now.

“People are definitely getting out on their own,” Groth said. “For us, we have insurance through our national organization, and we cannot promote any type of group running at all.”

Some members of the group have gotten creative in their approach to the evolving sport.

One member from northwest Indiana, who completed more than 70 races last year, goes out for a run every day and tracks it virtually, Groth said.

“He’ll go to a place in his neighborhood or a store that he frequents, and he makes the name of his virtual 5K of the day and posts a picture,” she said. “I think that is a really cool and fun way he is getting out there and staying active.”

Groth herself is continuing to support the running community as she works from home. With an abundance of race shirts she has collected over the years, every day she wears one, she is making a donation of $5 to a benefit partner she selected.

“When I go back to work and have to wear my normal work clothes again, I will be making a donation,” she said.

Groth also goes for a walk every day wearing her different race shirts. When she gets back, she pulls out any medals or race bibs she had collected and makes a social media post.

Other runners have turned to running software like Strava, which uses global positioning data to track running and cycling exercises.

Recently, Groth attended a webinar from one of the running software companies. She said the company had come up with a lot of different tools to help make the virtual runs be more personal.

“It’s tough. People miss that interaction,” Groth said. “That is the biggest part that is missing. A lot of people like the competitiveness of being out there and trying to beat somebody. At least we are able to get outside.”

As annual 5K and 10K races continue to be canceled due to the COVID-19 pandemic, Groth said no one in the running community truly knows when races will resume.

“I think we were all hoping that by July we would be running, but now we are seeing that communities are canceling their July 4 activities,” Groth said. “We had an event in April that we postponed until August. It’s all just a waiting game to see what is going to happen. We are at the mercy of the communities that host our events. We are bound by how they want to open their communities.”

As a member of some international race director groups, Groth said conversations have revolved around how races can be hosted while abiding to social distancing guidelines.

“It’s tough because you want people to get out there and be active, and it’s such a great sense of community, but there are so many limitations,” she said.

In times when the running community itself is having to self-isolate, Groth said she hopes people realize the impact on a broader scale.

“I want people to just be understanding that a majority of these races are ran by nonprofits,” she said. “If they have to cancel an event, it’s not by their choice.”