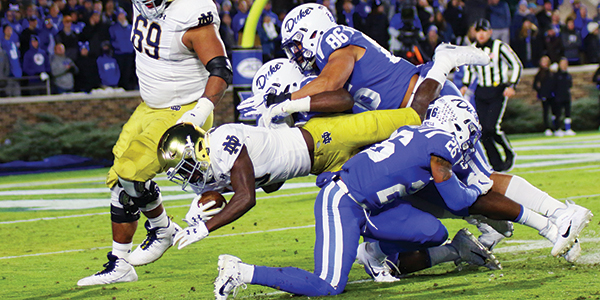 Notre Dame athletic director Jack Swarbrick discussed when teams would be allowed back on campus and what the 2020-21 sports season could look like due to the COVID-19 outbreak. (Leader file photo)

NOTRE DAME, Ind. — When Notre Dame athletic director Jack Swarbrick met with the media via Zoom teleconference on Tuesday, one of the pressing questions was when athletes would be able to return to campus to begin preparation for the fall sports seasons.

One concern voiced by sportswriters was with each state being left to its own devices about when to reopen, would the Fighting Irish be left at a disadvantage?

“I’m not concerned about competitive advantage or disadvantage,” Swarbrick said. “I accepted long ago in this pandemic that’s a natural consequence, and I have told our coaches over and over again: Do not focus on that issue. Focus on health, your health, your staff’s health and, most important, the health of our students. And we’ll go from there. Whatever the consequences are, they are.

“There will be great disparities that are inevitable in this. The NCAA will do what it can, I think, to regulate them. But you’re still going to have circumstances where schools aren’t open, and others are. Or states that haven’t reopened, and some have.”

Like the states, there is quite a divide among college and university presidents about how to plan for the 2020-21 season. Some are ready to open now, while some are trying to stick with the guidelines being set forth by the states they reside in. There is no-one-size-fits all solution to this problem.

Swarbrick added that while he understands the desire of everyone to return to normal, no one knows that normal is. Once thing is for sure: safety will be the first and primary condition that drives all decisions.

“We’ve all agreed at least six — and more likely seven — weeks would be required to safely prepare the football team,” Swarbrick said. “So, in the interest of safety there, just as with the decision to open the dorms, you have to figure out a way to assemble those students, to put them in an environment that’s safe … and to prepare them for the season.”

Athletic directors around the country and working on different scenarios when it comes to actual competition. Many believe that schedules will have to be flexible, meaning that depending on what state the team you are playing is from, you might have to move the game to a different date or location.

Swarbrick said he has been impressed with how the athletic directors have dealt with a very tough situation.

“One of the things that’s impressed me the most during this extraordinary period of time has been the level of collegiality and collaboration,” Swarbrick said. “I get to interact with the commissioners on a regular basis. I can’t say enough the extent to which they are working together, spending time together, communicating with each other. And I think that’s the most important thing. It gives us a chance to come up with an overarching policy and ability to start together.”

But with that said, Swarbrick knows that some things may be out of his control.

“I think we all recognize there’s a significant chance that may not be possible, either because states or individual colleges and universities take different approaches,” he said. “We just have to take the time to figure that out as we go. There are a host of questions that become a byproduct of that: How many games do you need to have in a regular season to have a playoff? What might a re-engineered schedule do to the postseason and the bowl games? What about records, what about Heisman Trophies? Does a team whose school decides it can’t participate in a position where it’s credited with a forfeit? I sure hope not.”

Chloe Spitz is a senior on the Buchanan softball team. What has been one of your greatest accomplishments as an... read more