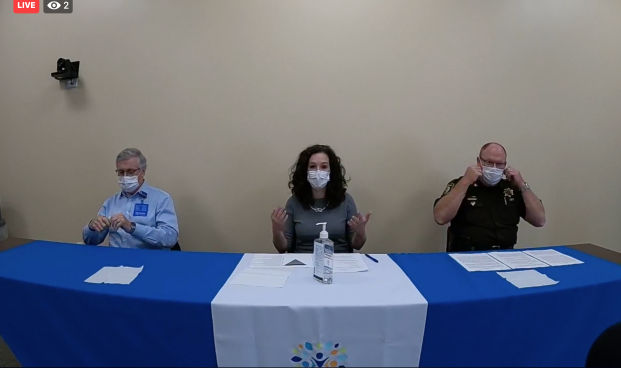 BERRIEN COUNTY — In a weekly address from the Berrien County Health Department, health officer Nicki Britten was joined on Facebook Live by Spectrum Health Lakeland’s President Dr. Loren B. Hamel and Berrien County Undersheriff Chuck Heit. Together, the three addressed the current number of COVID-19 cases in the county and provided an update on the county jail, testing and plasma therapy.

Nicki Britten also announced that website BerrienReOpens.org had been launched to begin giving businesses guidance on how to prepare for opening back up in the future.

Britten acknowledged that many may be feeling “quarantine fatigue,” but reminded residents not to become lax on social distancing measures.

“This is continuing,” Hamel said. “The west side of Michigan didn’t get hit as hard or as fast as the east side of Michigan. We are seeing those numbers steadily and gradually climb. It’s important, despite being sick and tired of wearing masks. It’s more important than ever.”

Hamel would like to see positive cases and numbers of those hospitalized decline further before relaxing precautions.

Hamel agreed. He confirmed that Spectrum Health Lakeland had 20 COVID-19 patients in the hospital as of the briefing.

“It hovered around eight to 12 [hospitalized COVID-19 patients] for a while,” Hamel said. “We have a lot of capacity, and we are not running out. We hope not to use that capacity. We are able to stand up 67 more beds than we normally have and a second ICU which are currently using as an isolation ICU.”

With news of positive cases appearing in nursing facilities and long-term care facilities, Britten acknowledged that some of the increase in hospitalizations was due to those cases.

Hamel said that with each passing week or two, that Spectrum Health Lakeland was gaining more capability to expand on COVID-19 testing.

“We are doing that as broadly as we can,” Hamel said. “[Virus] antibody tests are still pretty scarce. We are trying to ramp up the antibody testing, but it is not available yet. We are dedicating the antibody tests for those who think they’ve had the disease and are willing to be plasma donors.”

The medical organization continues to do plasma therapy for hospitalized patients. The treatment includes using donated plasma from a patient who has fully recovered from COVID-19 and is confirmed with a negative test after formerly testing positive.

“That’s the perfect use for that test,” Hamel said. “It not only helps confirm the diagnosis, but it helps save lives.”

“We are doing a symptomatic approach to testing,” Heit said. “We have tested 10 inmates, and they have all come back negative.”

Heit said that the jail has implemented more precautions to help mitigate the spread of COVID-19 to the inmates. One such change is that an arresting officer no longer needs to enter the jail. The jail has also contracted with a 24-hour medical staff and implemented additional cleaning of isolation cells.

CASSOPOLIS – A Dowagiac man learned a lesson in civics and the rights of parolees when he was sentenced Friday... read more