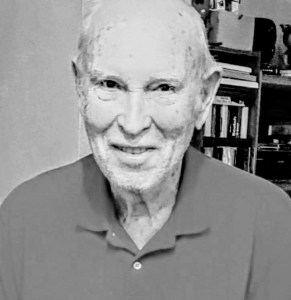 Howard served during WWII in the Navy, trained as a Marine and served the Army Air Corps.

On Jan. 24,1953, he married Beverly Jean Keeler in Dowagiac. They raised five children while moving around Michigan for his 32-year engineering and construction management career with General Telephone, GTE. He retired in 1987.

Howard loved music. He joyfully added resonant bass to the family barbershop quartet, church and other choirs, on stage, and with SPEBSQSA; he played tuba in a German band. Howard was a church elder, deacon and trustee, Kiwanis president, and lifetime member of the Elks. He and Bev traveled extensively. Howard relished playing golf and worked on Habitat for Humanity homes well into his 80s.

Six brothers and three sisters all preceded Howard in death.

Remembrances and condolence messages may be written and viewed at hohnerfh.com and memorials donated to Habitat for Humanity or the First Presbyterian Church music fund.

Celebration of Howard’s life is planned for later this year.