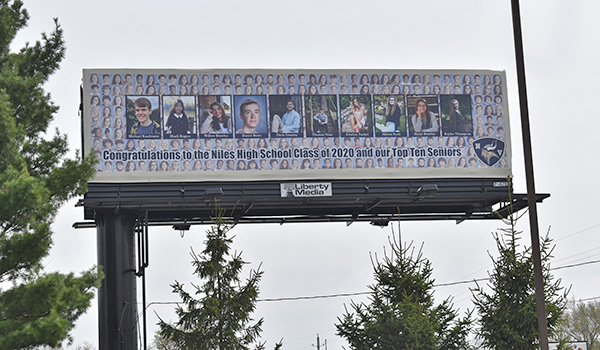 NILES — The faces of the Niles High School’s Class of 2020 are now visible from S. 11th St. as drivers pass by on their way south.

A billboard featuring the class’s top 10 seniors prominently, and the rest of the class of 178 students, celebrates the students’ achievements in a uniquely public way that also adheres to the social distancing guidelines. With usual senior activities, and even commencement, postponed or canceled due to COVID-19 mandates, school administrators have sought other ways to make sure their students feel celebrated.

On the school’s Facebook page, the billboard was debuted without a location so that students and their families could go on a drive and come upon the surprise for themselves.

Niles High School principal Molly Brawley has kept the school’s students, and especially the graduating class, on her mind since the school buildings emptied on March 13.

“Our first thoughts obviously go to our kids,” Brawley said. “What’s going to happen getting learning going and things like that? But then we immediately started thinking about our seniors.”

The school traditionally has a list of activities to celebrate the graduating class throughout the month of May at the school.

“It’s a tradition,” Brawley said. “We went through the list of things they were losing out on, and we tried to come up with a plan to somehow duplicate those in a different way. One of the big traditions in Niles is being in the top 10 of your class, in terms of GPA. It’s a huge deal.”

The top 10 students from Niles High School have both their senior photos and names displayed prominently on the billboard. The rest of their classmates surround their photos, smaller in the background.

After calling around to several outdoor media companies, the school administrators secured the location and the billboard. The celebratory billboard will continue to fly through the month of May.

The school had originally planned to unveil the billboard with a video. When technical difficulties hindered that plan, staff chose stills including Principal Brawley, Superintendent Dr. Dan Applegate and even Viktor the Viking, the school’s mascot.

The challenge posed on social media was Brawley’s way of getting the students excited.

“They’re sending me pictures, and we’ll have a drawing and give out a small prize,” she said, of students submitting photos in front of the billboard. “Some parents were finding [their child] and circling their pictures, and posting it on social media. It was very, very fun.”

As of now, the school’s May 28 commencement has been canceled.

“We are still under strict orders, but we are going to do a couple of things through social media platforms between now and the official graduation date,” Brawley said.

“It all depends on what social distancing orders are from the governor’s level,” Brawley said.