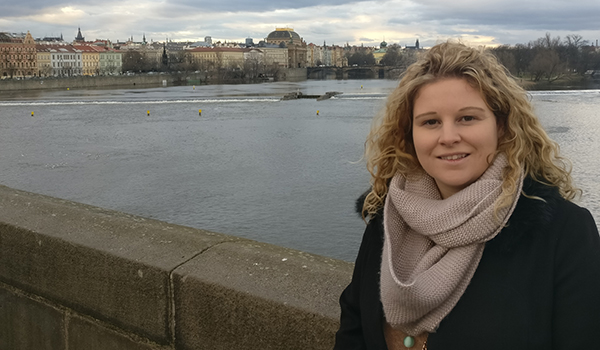 SMC Niles tutoring supervisor has taught all over the world

The marshmallow confection shaped into colorful chicks and bunnies may be popular in America, but the well-traveled Scott hails from England. She expects in December to complete her master’s degree in education from the University of Nottingham.

“SMC has given me a unique insight into the U.S. education system and how a community college can support a community,” said Scott, who worked for the British Council during six years in South Korea. Founded by the British government, it specializes in international cultural relations and educational opportunities, working closely with embassies around the world.

She worked as a young learner specialist in a school in Seoul’s wealthiest neighborhood, Gangnam, referenced in the 2012 hit “Gangnam Style,” the first YouTube video with a billion views.

“I had my fair share of Spam gift sets living in Korea,” Scott said. “Korea is its second-largest consumer and sees Spam as a luxury gift. Korean co-workers received wine sets and I got the more expensive and prestigious 24-pack Spam set.

“We taught students aged 5-15,” she said. “I mostly worked with bilingual ‘returnees’ born in English-speaking countries. Classes served as a safe space when otherwise they were struggling to immerse back into Korean culture.”

She met her husband, Jesse Ewert, in 2012. They both taught in Bundang, a satellite city outside Seoul. They left in 2014 to travel for six months, spending just over a month in India.

“That was a real culture shock, but very eye-opening,” she recalled.

They then moved on to Nepal, spending time in a place an earthquake later devastated.

“It was a beautiful country,” Scott said, “although I realized I was deathly afraid of monkeys halfway up the Monkey Temple in Kathmandu. We hiked only a part of the Annapurna range in the Himalayas but it remained one of my favorite parts of that trip.”

The couple intended to tour New Zealand for a year but I was offered a position on the South Island.

“I also was course coordinator for New Zealand studies which still makes me laugh as I am from England,” she said.

Her husband landed his dream “gap year” job in a ski shop. The Minnesotan, an avid snowboarder, spent winter months on nearby slopes, but Nicola didn’t grow up skiing.

“In England, skiing is classified as an elitist sport as the closest real slopes are in Europe,” Scott said. “We returned to Korea in 2017 for me to continue teaching at the British Council.”

After spending last March-June in Minnesota, they made an extended road trip to New Orleans to celebrate receiving her green card, settling in Niles last summer for his career change from teaching to consulting for small start-ups.

Scott as an undergraduate majored in business and information technology. Though she began teaching English to travel, she found a passion for teaching and went on to study for her teaching qualifications. Now, she has taught in Korea, New Zealand, England and Italy.

“Teaching in South Korea enabled me to save and still travel. A quick flight over to Vietnam, Laos, China, Thailand, Hong Kong and Japan were all within reach,” she said. “When I started working for the British Council, I had ample vacation time as it was under a British contract and had civil servant and ambassador privileges. I could travel for four weeks in the summer or up to five weeks in the winter – with weekend trips here and there. I do miss weekend trips during this lockdown, but I respect the experts and why we are doing this. The world may be altered, but it will still be there after all of this.”

“Students have been so versatile and adaptable,” Scott said. “We were positioned to support students immediately since we already offered online consultations. Zoom allows us to work with students similarly to an in-person appointment.

“We also use GoBoard, a platform that combines video consultations with an interactive canvas which is especially useful for math and science. Since classes went entirely online March 13, we have had an impressive 643 tutoring appointments. We have also been able to support faculty by offering online mini-workshops to classes to see how they are progressing with specific assignments.

“As the semester ends, we are still supporting and are available for students every day. We are working on videos and presentations to help students and faculty during summer semester, which starts June 1. Many colleges charge for their tutoring centers, and I have tutored privately in the past. Private tutors can charge in excess of $70 an hour, but SMC’s free services are available to all of our students.”

NOVAK: Shula and the Dolphins were my favorite team

I know that I am reaching that age when people you know, or know of, are going to start passing... read more