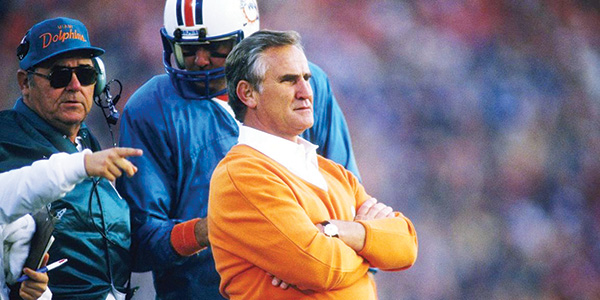 NOVAK: Shula and the Dolphins were my favorite team

I know that I am reaching that age when people you know, or know of, are going to start passing away.

Such was the case Monday morning when I awoke to find out that the football coach of my all-time favorite National Football League team, the Miami Dolphins, had died. It was tough to swallow because Don Shula was one of those hard-nosed, old-school coaches that seemed like he would never die.

I was a Dolphin fan growing up as a child in Decatur. I am not sure how I chose the Dolphins over the Detroit Lions or Chicago Bears, but I did. Maybe it was the cool uniforms Miami wore with a dolphin on the side of their helmets.

Maybe it was the cast of characters that played for Miami that caught my fancy as a young man. They were brash and had long hair and looked like rebels. Maybe that was what drew me to them — players like Jim Kiick and Larry Csonka. Mercury Morris and Paul Warfield. Then there was the “No-Name Defense.”

They were truly a team. Every player was important and Shula made them unstoppable. Especially in the 1972 season when they became the NFL’s only undefeated team.

The Dolphins are still the only team to win every game on its schedule, including the Super Bowl.

Shula was 90 when he died on Monday. He played in the NFL before becoming an assistant coach, including a stint with the Detroit Lions. He became a head coach with the Baltimore Colts before taking over in Miami, where he forged a Hall of Fame career and became a coaching legend.

When Shula left the game, he was and still is the all-time leader in regular-season victories with 328 and career wins with 347. New England’s Bill Belichick is 55 wins behind Shula. No one else is even in the neighborhood.

Shula spent 33 years as a head coach, including 26 of them with the Dolphins. He was the son of Hungarian immigrants who settled in the small Ohio town of Grand River. When he began his NFL coaching career, he was the youngest to ever do so. When he left the league, he was the best there ever was.

I think what attracted me to him and the Dolphins was the no-nonsense work ethic. They played the game the way it was supposed to be played. They were tough. I liked that when I was growing up. It kills me to watch the game the way it is played now. The NFL is much softer now than it was back then.

I wonder if coaches like Shula and the type of players he had would be able to have the same type of success under today’s rules? Thankfully, I will never have to find out, and my memories of the Dolphins and that magical 1972 undefeated season remain one of my most cherished.

I remember as a kid writing to the Dolphins for a team photo. That was in 1972. I received a photo back with the autographs of the players on it. Real autographs. This team used no auto pens.

Unfortunately, I lost that photo somewhere along the way. I wonder what that would be worth on the open collectibles market today? Not that I would have ever sold it.

DOWAGIAC — Dawn Schlipp is no stranger to owning a storefront facing the streets of downtown Dowagiac. In 2009, the... read more