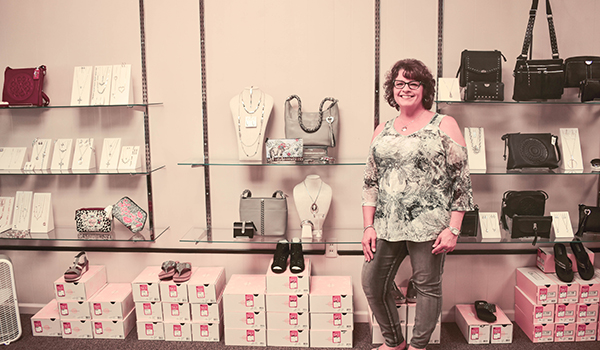 DOWAGIAC — The streets of downtown Dowagiac have sat quieter since COVID-19 hit, according to some business owners.

However, on Saturday, with warmer weather and retail businesses allowed to open for curbside pickup, Cathy Franz, owner of the Marshall Shoppe at 138 S. Front St., Dowagiac, felt like some normalcy had returned.

Franz, the owner of one of Dowagiac’s oldest clothing stores, was one of several downtown Dowagiac business owners who is now opening her doors for curbside pickup.

On April 24, retailers who were considered non-essential under Michigan Gov. Gretchen Whitmer’s Stay at Home, Stay Safe Executive Order were allowed to re-open their doors for curbside delivery.

“I was thankful we were allowed to at least do that because it offers the ability to at least do something or maybe even a little more,” Franz said of the news she could start selling merchandise again.

“I was patiently waiting,” she said with laugh.

In her first week of offering curbside pickup, Franz said she was fortunate to have loyal customers who were ready to shop.

“I reached out to as many customers as I could and had the ability to,” Franz said. “I mostly used text and Facebook messaging and put it out there. A lot of people called so it was very positive.”

Kim MacGregor, president of the Greater Dowagiac Chamber of Commerce, said for the businesses that are doing curbside pickup, they have been supported by the local community.

“It’s been phenomenal,” she said. “We have people that are posting on Facebook some of the different things they are selling and people are able to message or call them and say, ‘I want this or I want that.’”

Franz said, recently, customers have called to see if she is open and if they can shop by appointment.

Even with beginning curbside delivery, Franz said she has lost half a season for selling and also experienced some issues with receiving merchandise. However, she feels confident the foot traffic will come back to her store nestled downtown.

“I can’t recover all the lost revenue by any means,” she said. “It’s just not physically possible with the amount of time we have. Right now, we are looking at the middle of the month, and I think if we do open, it is going to be restricted or pushed back to the end of the month.”

MacGregor hopes more retail owners will see the curbside pickup as an option.

“I think everybody needs to take advantage of that,” she said. “Whether it’s on Facebook or however they choose to do it, so people can see what they have to sell.”