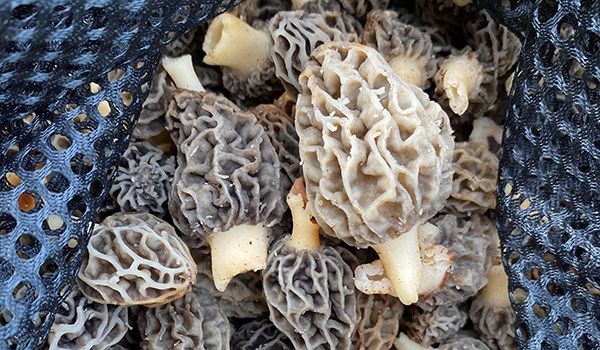 BERRIEN COUNTY — The arrival of spring showers and warming temperatures means that hunting season has begun.

Unlike animal hunting, this season does not require many special tools, just a bit of know-how and luck.

Morel hunting season is here, and Bob Ruff, of Buchanan, who runs the Berrien County Morels Facebook group, counted 322 morel mushrooms with his wife from their hunt on Saturday.

“This year, we found our first mushrooms on Monday [April 27],” Ruff said. “There’s been years in the past in the first week of April where we were finding them.”

The morel mushroom season, according to the Michigan Department of Natural Resources, lies between April and June. Morel hunters know that the window is limited and does not completely span the three months. When Ruff created the Facebook group five or six years ago, he hoped that it would be a place to help gauge when morels were appearing.

“It’s become a little community,” Ruff said. “We kind of share the little secrets, of course, without ever sharing where we found [morels].”
According to the DNR website, morels require a warm and wet condition to best grow. If it is a cold and dry spring, it can mean very few morels appear.

Ruff said he has looked to areas with rotting trees to find the mushrooms, especially in areas of forest hit hardest by the ash boring beetles that came through years ago.

“I find a lot of [morels] in woods where there are a lot of dead trees,” Ruff said. “People say they find them around dead elm trees, or anywhere that there’s been a fire. If there’s been a fire in parts of the woods, the next year they’ll be a lot [of morels] there.”

Ruff also said that hunters have had success finding the mushroom variety under fruit trees.

Morel mushrooms are a variety that have not been successfully commercially farmed. The foraged nature of the morel mushroom makes it a valuable commodity if the mushrooms were to reach stores.
“If you find them at the grocery stores, you’re looking at $40 to $60 a pound,” Ruff said.

He and his wife prefer to enjoy them at home, rather than to sell them.

Breading and sautéing them with garlic salt and butter is a favorite way to enjoy morels.

“We call them butter boats,” Ruff said. “The nooks and crannies hold butter.”

They also pair the mushrooms with wild game meat, like venison, or sauté the morels and pair with steak.

Ruff and his family have hunted morel mushrooms as far back as he can remember.

“My family is all hunters, outdoorsmen, fishermen,” Ruff said. “There’s deer hunting in the winter, and ice fishing, but we rarely get good enough ice to ice fish here. In the spring time, you get a couple of weeks of turkey hunting and a couple of weeks of mushroom hunting. It gets us outside. We get to look for something and find something.”