Raymond Paul Janssen, 96, of Dowagiac, passed away Wednesday, April 22, 2020, from COVID-19 virus infection at Bronson Hospital Kalamazoo. Two daughters also infected were able to be with him at his bedside. 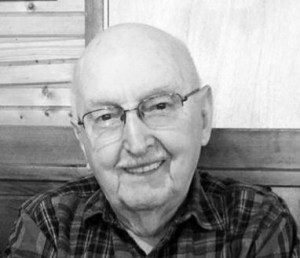 He married Eleanor Drake on Nov. 23, 1946, in Dowagiac and were happily married for more than 70 years before he lost the love of his life.

He was preceded in death by his wife, Eleanor; two children, Theodore and Tammy; two grandchildren, Harley Hemenway and Melissa Warkentien; his parents; eight brothers and eight sisters. He was the last of his generation for his 60 nieces and nephews.

Ray worked in a variety of factory jobs, Goerlich Muffler, Clark Equipment, Consolidated Diecast, Rudy Manufacturing and retired from Sundstrand where his last 20 years he worked as a truck mechanic. Auto mechanics was his passion, his hobby and his part time job at home. Generous to a fault, helping many family and friends with their automotive problems.

He was a WWII veteran and Purple Heart recipient from his injuries during the battle of Leyte Gulf in the Philippines. He was honored with a Talon Honor Flight to Washington, D.C., in 2015. He also visited his nephew’s classroom multiple times and talked to students about his experiences during the war.

He was an active member of the Holy Family Catholic Church in Decatur and the Monday Night Running Club at SMC in Dowagiac.

Ray and Eleanor went on many club trips, including Hawaii and the Grand Canyon.

He was on the Fire Board of Wayne Township and a former firefighter at Twin Lakes Fire Department where he was a founding member and assistant fire chief.

Ray was a founding board member of Dowagiac Federal Credit Union and served until a few years ago. He was a member of the Knights of Columbus and the Decatur VFW and was very active at the Cass County COA (Council on Aging).

He and Eleanor enjoyed camping for many years and especially loved to play games with family and friends. They enjoyed snowmobiling in their younger years but switched to snow shoeing and cross-country skiing when they were in their 60s. Adventurous, they traveled to Saudi Arabia to visit Tim and twice to Brisbane, Australia to visit the friend he made in the WWII.

Due to the shutdown for the virus which ended his life, there can only be a private service with his children and spouses. A memorial mass and a celebration of his life will be planned once it is safe for large gatherings.

In lieu of flowers, the family ask that donations be made to the Holy Family Scholarship Fund or in his memory to Cass County COA (casscoa.org or (269) 445-8110). Those wishing to leave an online condolence may do so at newellchapel.com.