DOWAGIAC — Last Saturday, Dowagiac Union High School seniors would have been preparing to attend their senior prom. However, with the COVID-19 pandemic canceling face-to-face school, the Masquerade Ball was put on hold.

The Class of 2020 voted on the theme last fall, and on March 12, organizers hung posters around the high school. The following week, ticket sales were scheduled to kick off. However, the last day of school for students unknowingly was March 13 after Michigan Gov. Gretchen Whitmer ordered K-12 schools to close due to the COVID-19 pandemic.  Now, the tickets remain boxed up.

One Dowagiac family still wanted to give their senior a night to remember.

LaDonna Sandora, along with the help of her family, spent about a week gathering decorations and planning to surprise her daughter, Marissa Jones, with a prom all her own. 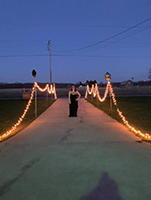 Decorating the driveway leading up to their home with twinkling lights and star balloons, Sandora planned the gesture after she noticed her daughter feeling down about missing milestones.

“She had just been feeling kind of down with everything,” Sandora said. “I thought it would be a cute idea to kind of cheer her up. I told her to get dressed up, and we were going to go take pictures in her prom dress.”

Like other seniors, Sandora said her daughter had already brought her prom dress before the COVID-19 pandemic.

When the pair returned from the outing, Jones was surprised by her family’s idea to re-create the night.

Jones said the gesture made her happy, and she was grateful to her family for the effort.

“I was left with a smile on my face but also wanted to cry at the same time,” she said.

Sandora said the family tried to mask the evening in a prom-like atmosphere.

“I pulled up, and her dad was waiting to open up the truck and get her out of the truck and walk her down the driveway,” Sandora said. “Then, we made some punch and had some cookies.”

Now, other senior families are hoping to host similar celebrations. Parents in a Facebook group dedicated to the Class of 2020 have shared ideas on how to plan and still celebrate senior year milestones like prom and graduation.

Jones’ plans for after graduation include taking a gap year before attending Southwestern Michigan College and studying art.

Sandora encouraged other parents of seniors to get creative and plan their own mock prom for their senior.

“I think it lifted her spirits,” Sandora said.

CASSOPOLIS — The Cassopolis Public School kitchens have been looking different for the past seven weeks. Instead of cooks working... read more