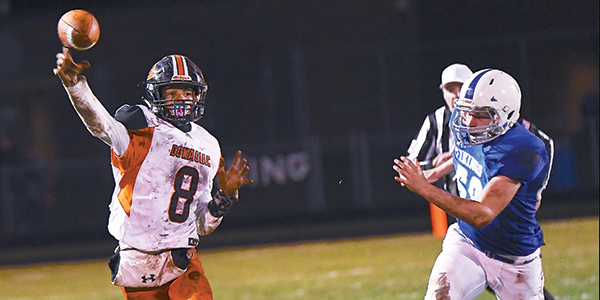 Dowagiac senior Cailyn Murphy was selected to play in the East-West All-Star Game, unfortunately that game has been canceled due to the COVID-19 outbreak. (Leader file photo)

DOWAGIAC — It was a bittersweet moment for Dowagiac senior Cailyn Murphy when he received news that he was selected to play in the 38th annual Michigan High School Football Coaches Association East-West All-Star Game.

He was excited to be recognized as one of the top players in the state on one hand, but since the game has been canceled due to the COVID-19 pandemic, his excitement was muted.

“I found out about it Tuesday,” Murphy said. “But I had already heard that they had canceled the game.”

Murphy, who is on the West All-Star roster, has committed to continue his academic and athletic career at Ferris State University this fall.

“He would have played wide receiver in the all-star game,” Brooks said. “He has good height and leaping ability, and that will cause matchup problems for smaller defensive backs. He was a three-sport athlete throughout high school, which is pretty rare these days. I believe his overall athleticism is what impressive.”

Murphy said he was in awe of the selection.

“I just wanted to play one more high school football game,” he said.

Murphy said he has been working out the best he can with the “Stay Home, Stay Safe” executive order still in place in Michigan until at least May 15.

“I have to be there the first week of August,” Murphy said. “I have been doing the workout program they sent me. Most of the things you can do at home, but some of it is a challenge without being able to go anywhere.”

Murphy is not the only southwest Michigan selection to the West roster.

He will be joined by St. Joseph’s Jeremiah Sterling and Berrien Springs’ Kevin Blaylock.