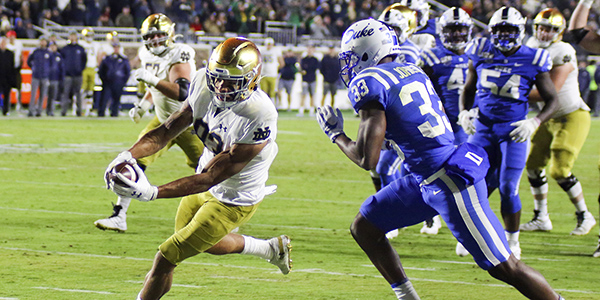 Cole Kmet
The first tight end selected in the 2020 NFL Draft, Cole Kmet went as the 11th pick of the second round (43rd overall) to the Chicago Bears. A Lake Barrington, Illinois native, Kmet is the first Notre Dame player drafted by the Bears since 2001 (Mike Gandy, OG).
In 35 games played for the Irish, Kmet reeled in 60 receptions for 691 yards (11.5 avg). No tight end in program history totaled more touchdown receptions in a season than Kmet’s six in 2019 (tied — Ken McAfee, 1977).
With Kmet’s selection, every Notre Dame week one starting tight end since 2003 has been drafted, beginning with Anthony Fasano.
Kmet became the 10th tight end in Irish history to have 400 or more yards in a season (first since Troy Niklas in 2013), and posted 43 receptions in 2019, the sixth-highest number of receptions by an Irish tight end in a single season, over eleven games. Kmet missed the first two games of the season with a collarbone injury.
Kmet posted four catches for 65 yards vs. Virginia, totaling 13 receptions over two games (vs. Virginia and at Georgia). Just two Irish tight ends have totaled more receptions over a two-game span (most was 16 by Kyle Rudolph in 2010 vs. Michigan and Michigan State) since 1996.The Irish tight end totaled a career-high nine catches at Georgia, which tied the program mark for receptions in a single game by a tight end. He tallied 108 receiving yards and a touchdown (seven receptions for 68 yards and a touchdown coming in the first half), and was named the John Mackey Award’s Tight End of the Week in Week 4.
While a student at Notre Dame, Kmet also was a pitcher on the Irish baseball team, seeing action for 65 innings over two seasons and totaling 66 strikeouts. He led the team with eight saves as a freshman in 2018.

Chase Claypool
The Pittsburgh Steelers selected the reigning Notre Dame Monogram Club MVP Chase Claypool with the 17th pick of the second round (49th overall).
The 2019 Camping World MVP, Claypool made his mark on Irish record books, ending his career as seventh in Notre Dame history in career receptions (150). In 2019, the Canada native led the Irish with 66 catches for 1,037 yards and 13 touchdowns while playing in all 13 games. His 13 receptions in the end zone were the sixth-most in a season by any Irish player.
After his final game in an Irish uniform, he had totaled the seventh-most touchdown receptions in Notre Dame history (19). Claypool also passed the 2,000-career receiving yard plateau in 2019, totaling 2,159 career receiving yards. Just five receivers in Notre Dame history have posted more touchdown receptions in a season than Claypool’s 13 in 2019.
Claypool posted a career-high four touchdown receptions vs. Navy this season, tying for the most in a single game by an Irish receiver with Maurice Stovall (vs. BYU, 2005). Three of those receptions came in the first half, marking the first time an Irish player has scored three receiving touchdowns in a single half since at least 1950.
Claypool passed the 400-yard receiving mark for the third consecutive season. He is among only four Notre Dame wideouts since 1996 to accomplish this feat (joining Michael Floyd, Rhema McKnight and Malcolm Johnson).
The newly-minted Steelers rookie will join fellow Domers Stephon Tuitt and Jarron Jones in Pittsburgh.

Troy Pride Jr.
With the seventh pick of the fourth round (113th overall), the Carolina Panthers selected cornerback Troy Pride Jr.
Playing in 45 games, the Greer, South Carolina, native snagged four interceptions over his career, in addition to 121 tackles (88 solo), one forced fumble and two fumble recoveries. As a senior, he made 40 tackles with an interception and six pass break-ups.

A four-year starter for the Irish, he was just one of four true freshmen to start for Notre Dame on defense in 2016. The defensive back was also a member of the Notre Dame track team, competing at the ACC championships in multiple events. In 2017, Pride Jr. earned All-ACC second-team accolades in the 60-meter dash (6.73), and in 2016, he claimed the same honor in the 100-meter dash (10.47).
Pride becomes the first Irish DB drafted since Julian Love in 2019, and the first Notre Dame selection by the Panthers since quarterback Jimmy Clausen in 2010.

Khalid Kareem
To kick off with the first pick of the fifth round, the Cincinnati Bengals selected Khalid Kareem 147th overall.
The reigning Notre Dame Defensive Player of the Year, Kareem served as a team captain during the 2019 season, and finished the year as the top-rated player on defense according to Pro Football Focus, earning a season grade of 85.1 with a pass-rush grade of 86.6. Entering his senior year, he earned spots on the watch lists for the Badnarik, Nagurski and Hendricks Awards.
Over his career, Kareem played in 43 games and posted 109 tackles (56 solo). The Detroit native totaled 13 sacks (5.5 during his final season with the Irish), forced four fumbles and recovered two.
While Kareem will be the sole Domer on the current Bengals roster, tight end Tyler Eifert made a significant mark on the franchise as the last Notre Dame player to be drafted to Cincinnati in 2013.

Alohi Gilman
Continuing the trend of recent Irish players finding an NFL home in Los Angeles, safety Alohi Gilman was selected with the seventh pick of the sixth round (186th overall) by the Los Angeles Chargers. Gilman will join Isaac Rochell, Jerry Tillery and Drue Tranquill with the Bolts.
Chosen as a captain for the 2019 season, Gilman served as a staple in the Irish secondary. The Hawaiian began his collegiate career at the United States Naval Academy before transferring after the 2016 season.
Over his career, Gilman totaled 245 tackles (141 solo) over three seasons, including the initial season at Navy, and three interceptions. In 2020, he started all 13 games, finishing fourth on the team with 74 tackles, 3.0 TFLs, one sack, one interception, two break-ups, a QB hurry, one fumble recovery and three forced fumbles. Gilman posted the first sack of his career in 2019 vs. Boston College.
In his junior season, Gilman made headlines with big-time performances, including a two-interception and eight-tackle game vs. Syracuse that earned him Walter Camp National Defensive Player of the Week. In the College Football Playoff vs. Clemson, Gilman set a program bowl record for most tackles in a game with a whopping 19.
Gilman was a three-sport athlete (basketball, football and track and field) in high school, lettering three times in football (at three different schools).

NEW YORK, N.Y. — The University of Michigan football program tied for the second-most players ever selected during an NFL... read more