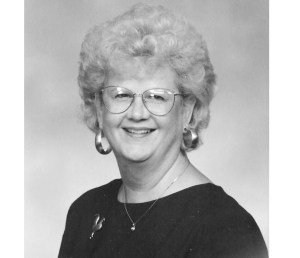 Martha Sue “Muffy” Branson-Banks, of Niles, ascended to heaven on April 20, 2020, after a seven-month battle with pancreatic cancer.

She was born on Sept. 30, 1941, to David Thomas Branson and Dorothy (Drake) Branson, in Port Washington, Wisconsin, the eldest of four siblings.

Martha graduated from Central High School in Green Bay, Wisconsin and maintained friendships from high school and all places and stages of her life.

Martha could only be described as having a personality that was larger than life and filled with love, creativity and vitality.

Her noteworthy artistic endeavors included sewing, mosaics and theater. Her sewing led to many quilts, dolls and other things for both family and friends. She had a gift with glass work and many of us have multiple mosaics that she created amongst other crafts. You would also be hard pressed to find a theater in the Michiana area that didn’t know Martha for either her acting or directing.

She was preceded in passing by her parents, David and Dorothy Branson.

In keeping with her wishes, cremation has taken place.

A memorial service will be this summer.