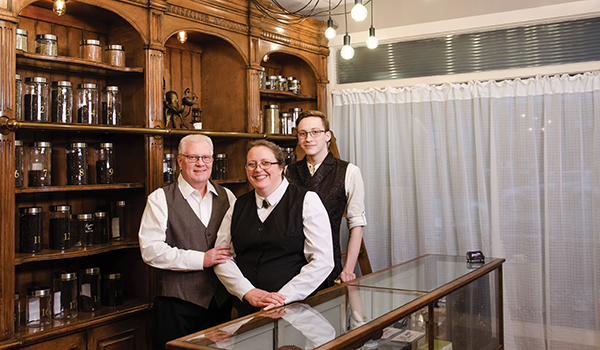 NILES — As businesses continue to feel the burden of continuing closures and restrictions of COVID-19 mandates and precautions, a local establishment is working to help ease the weight.

The Greater Niles Chamber of Commerce announced Tuesday it would be begin taking its second round of applicants for its Emergency Relief Program. The chamber’s initial offer of low-interest loans to area businesses affected by COVID-19 mandates was introduced on April 7. The loans were converted into grants at the chamber of commerce’s virtual meeting on Monday, as awards were determined for the first round.

“These businesses are put in a strenuous position and we want to get these grants allocated as quickly as possible. That’s why we set the original deadline, and opened it back up for a second round,” said Eileen Villanueva, membership coordinator of the Greater Niles Chamber of Commerce.

One of those businesses that received a grant was downtown’s Apothica Teas. The shop, filled with jars of tea blends and curiosities, has sat closed since the COVID-19 mandates began. While the prospect of applying for a loan was not ideal for Laura Hollister, owner of Apothica Teas, she said that she did not have many other options. Having opened last November, Hollister was not sure how her young business could afford to pay on a loan when operations returned to normal.

“I applied for it. I didn’t have any other options really,” Hollister said. “I was elated when [the Niles Greater Chamber of Commerce] called and said we had gotten the loan.”

“They went on to say that they had decided that, at this time, the loan would still be an incredible burden to the businesses in the long haul, and that they had converted it to a grant,” Hollister said. “I burst into tears. I got to sleep that night.”

For Hollister and Apothica Teas, the grant means that the business can “tread water” for a bit longer.

“I’m not moving forward, but I’m not drowning either,” she said.

For Hollister, the decision to close her business in the wake of COVID-19 meant more than just giving up sales. It was a decision she made to protect her son’s health. Her son, Nathaniel, is immunocompromised. His body does not recognize an infection, and with so many unknowns with COVID-19, doing curbside service was not worth the risk, she said.

The grant means that Hollister can continue to make the decision that is best for her family, as information is discovered about the transmission of COVID-19.

“Nathan woke up yesterday coughing and wheezing, he does every year when the tree outside his bedroom window blossoms,” Hollister said. “But this year it was super scary, even though we know it’s going to happen. Because, what if? Now I don’t have to decide whether to do curbside service and endanger my kid just so I can make rent. It would be impossible to overstate what that grant means for me.”

The grants from the Greater Niles Chamber of Commerce are to keep businesses on track to be able to open and operate again when mandates are lifted. The grants are specifically for general operational costs such as rent, mortgage payments, fixed debt and utilities. Businesses are not permitted to use the funding to replace sales or do a business expansion.

For Hollister, joining the chamber of commerce was the right thing to do when she opened a business downtown. She never thought that she would be on the receiving end of aid from it.

“It was hard for me to contemplate at first, because I didn’t want to be dependent,” Hollister said of the application process. She realized that during difficult times, where businesses and families are all facing the threat of COVID-19, that applying for help was not a reflection of weakness or of a poor business model.

Hollister said that the grant, along with the way that the Niles community has pulled together to help one another, has given her hope.

Businesses interested in applying for the Greater Niles Chamber Emergency Relief Program are encouraged to contact the chamber, or visit their website at GreaterNilesChamber.com/ERP. The deadline for businesses to apply is 5 p.m. Friday, May 1. Applicants may request up to $10,000.