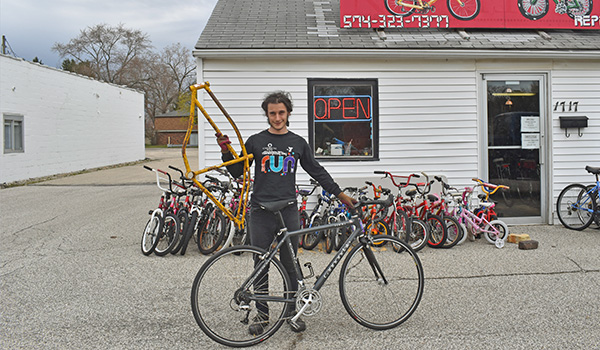 NILES — With mandates still in place to slow the spread of COVID-19, many businesses have felt a sharp decline in the income they can bring in. Swift Cycle, a bicycle shop off of Oak Street, is a little different. The shop’s owner and head mechanic, David Rees, has been seeing an upward curve in business through April. With used bicycles lined up in front of the shop, those passing by can see what the shop is about: getting people a set of wheels.

Swift Cycle is small, but bursts at the seams with an eclectic set of bicycles from child-sized to road-ready. Since the virus outbreak, the shop has been taking customers by appointment. Taking precautions like spacing out appointments and making sure things stay wiped down have become finer points in their business days.

“We are trying to serve people in a singular, one by one basis, to get people rolling and out on the road as much as possible,” Rees said.

The shop has been seeing customers for repairs on their existing bicycles, other customers have been purchasing bicycles for their children.

“It’s been a lot of tune ups,” Rees said. “Parents are anxious to get their growing child on something that fits them, usually for pretty inexpensive.”

With the weather slowly warming, and more people stuck at home due to the mandates, bicycling has become an activity that people can engage in to get outdoors while maintaining a social distance. About half of the business the shop is doing right now is with existing customers, with the other half being new customers looking for a way to get rolling.

Rees considers bicycles and bicycle repair to be essential transportation for many.

Rees has reined in most of the appointments between 11 a.m. to 3 p.m. on Mondays, Wednesdays and Fridays, but has made arrangements with those who cannot come during those hours.

The shop aims to fill a need Rees saw in 2014. Originally trying his hand at starting a bicycle courier business, Rees instead found a love for fixing bicycles.

“It kind of started as, instead of bringing them a package, I’d fix their bike,” Rees said. “I’d take it and bring it back to them. [Swift Cycle] essentially started as that, until I ran out of room at my apartment and had to get storage space.”

At the time, running a shop was not on his radar, he just enjoyed fixing bicycles.

When the location on Oak Street became available in 2014, he knew it was time.

“I have space to have bikes for sale and do a number of tune ups,” he said. “It’s an awesome habitat for the rehabilitation of this poor, junk steel to turn into vehicles for people.”

Rees sees that as a plus, especially now, as budgets have become tighter.

“We serve that clientele that wants a well working bike that’s going to be reliable, and can’t really spend over $150,” Smith said. “That’s a niche you don’t find with bike shops.”