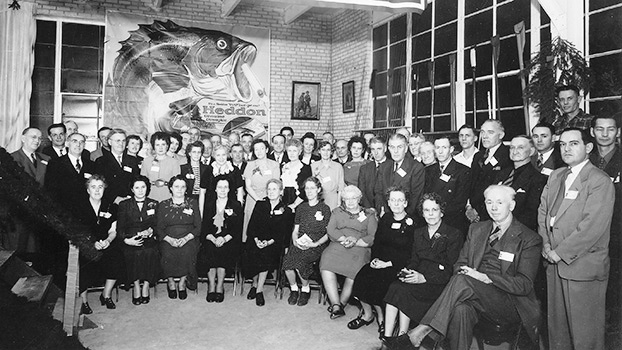 SPRINGFIELD, MISSOURI — A man who made contributions to the city of Dowagiac and the sport of fishing will now be inducted into a fishing hall of fame.

Heddon, along with the other inductees, will be enshrined in the Hall of Fame museum, which first opened in November 2017 within the Wonders of Wildlife complex at the flagship Bass Pro Shops store in Springfield, Missouri.

Heddon, who founded his company, James Heddon and Son, Co., in 1902 with his sons, Will and Charles produced a single fishing lure, the two hook “Dowagiac Expert,” according to heddonmuseum.org.

Dowagiac Mayor Don Lyons, who founded the Heddon Museum, along with his wife, Joan, in 1996, said he was not surprised of Heddon’s induction into the Bass Fishing Hall of Fame. The couple, who run the museum in the former Heddon manufacturing facilities, preserve and interpret the contributions made by the Heddon family in the city of Dowagiac and in the sport of fishing.

“If you trace the history of the sport of fishing that we know today, Heddon was one of a small handful of about fix to six people, who 120 years ago developed the sport that is today,” Lyons said. “He moved to Dowagiac with his family in 1860. He was 15 at the time.”

Lyons said Heddon began his career as a bee keeper and was one of the first people in Michigan to make a living off of keeping bees.

In 1900, at the age of 65, Heddon retired out of the bee keeping business and spent a lot of his time fishing and experimenting with different kinds of bait. Lyons said up until the 1900s, fishing was largely done with a standard hook and worm. However, Heddon began experimenting with the notion of having different types of artificial bait. He is credited with the invention of the first wooden-bodied artificial lure. Legends claim Heddon invented the first artificial lure while fishing on the Mill Pond outside Dowagiac, according to the Dowagiac Area History Museum.

From 1902 to 1950, Lyons said Heddon was the largest manufacturer of artificial fishing baits in the world. The manufacturer also started making reels and fishing rods to expand its product lines.

Lyons said although ownership of the company switched hands several times after 1955, Heddon’s legacy has continued to live on.

“You can still go into a tackle shop and buy Heddon branded artificial bait,” Lyons said.

“For the better part of 120 years, people have been continuing to use Heddon baits.”