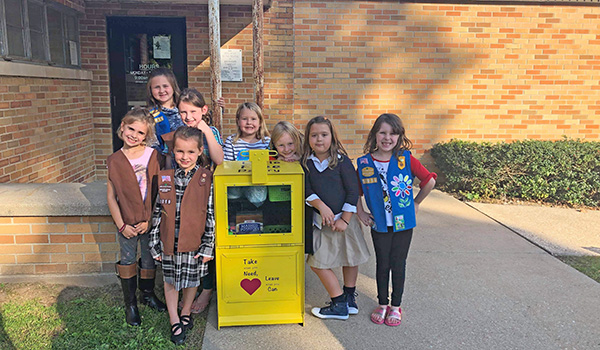 BUCHANAN — The thought of children going without food in her own community did not sit well with Ashley Hanson. Through her work as a Buchanan Area Recreation Board member and with special needs children at area schools, she saw that access to food was a challenge for some area residents.

Now, with two Little Free Pantries installed in Buchanan, she hopes to continue helping those going through tough times stay fed. Hanson has seen an increase in interactions in a Facebook group where she is an administrator. The group, Buchanan’s Little Free Pantries, has been busy coordinating efforts connecting community members with items they need, especially while access may be limited due to COVID-19.

“It was evident that there was an ongoing problem, that there are kids in our community that don’t’ have food all the time,” Hanson said. “That’s crazy for me to think about.”
The thought drove Hanson to think about ways that she could help. She recalled seeing posts on Facebook three years ago of Little Free Pantries elsewhere. The concept of an installed box filled with food, free for anyone to donate and take, seemed like a simple way to reach out and help. She decided to bring the concept to Buchanan.

The first Little Free Pantry box was installed at the Masonic Lodge on Oak Street in Buchanan around Thanksgiving 2018. Hanson and her husband built the wooden box, with a shelf and door that houses donations. A second box, utilizing a retired newspaper stand, was decorated and installed at the Buchanan Township Hall by Girl Scout Troop 52019 last fall.

The multilevel Girl Scout Troop has 10 members from kindergarten through third grade, ranking as Daisies and Brownies.  All of the members take turns maintaining the pantry at the Buchanan Township Hall, rotating so that two of the members watch it each month.

“They used some of their cookie sales money to fund this project,” said troop co-leader Katie Dutoi-Filley. “We helped [Hanson] with the one at the Mason’s Lodge. We helped her out for a month with filling it and noticed the huge turnover with it. It made us think that there was a need for another one.”

Hanson helped the troop find a location to put the second location, as well as helped members with the process of working with city ordinances.

With both Little Free Pantries up and running, Hanson has seen an increase in the community’s utilization of the food and goods donated to the boxes.

“Over the past month or so, there’s definitely been a pick up,” Hanson said. “It works really nicely. There’s usually people just putting things in as they drive by, or as they clean out their pantry and they have extra stuff.”

She also noticed that people check it, and if it seems low, they will pick up a few extra items from the store to donate to them on their way home.

In the Buchanan Little Free Pantries Facebook group Hanson helps run, she has seen interactions through the last month of community members connecting goods to people who need them and have difficulty finding as access to certain goods can be difficult with the current mandates.

“I noticed a couple of weeks ago that there was a lady who was looking for a certain sized diaper she couldn’t find in stores,” Hanson said. “People talked throughout the page and found someone that had diapers for her. There was also a gentleman who ended up sending some diapers from Amazon in the size that she needed. It’s a cool little connection that people in need can reach out, and that people who are trying to help can have an outlet to.”

The Little Free Pantries bear an invitation to those who approach them to “take what you need, donate what you can.” Installed before the COVID-19 virus arrived, the boxes also offer a contact-less access to food.

One of the things that struck Hanson about the concept was that it made food available to people in need at all hours of the day.

“There’s no time restraints on it,” Hanson said. “If you realize at some point in the day that you need something, and the other food pantries aren’t open, it’s there.”