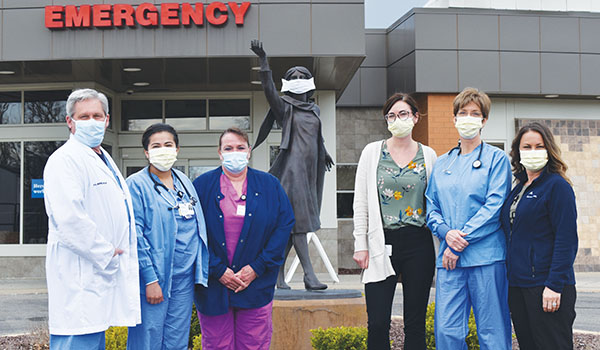 DOWAGIAC — In front of the emergency department entrance at Ascension Borgess-Lee Hospital, staff posed alongside the “On with Life” sculpture, which was also decorated with a face mask.

The gesture of putting a face mask on the sculpture, which was a gift from Dr. Charles Burling and his family in memory of Burling’s aunt, Millie Burling, was to recognize the staff of the hospital during the COVID-19 pandemic by the Ascension Borgess-Lee Foundation.

Outside of the emergency department sits a white trailer in the parking lot, which Ryder said is for those who have symptoms that might suggest they could be a potential COVID-19 patient.

“We have someone set up to intercept them before they even come into the waiting room so they are not mixing with the general population, who will be coming in for other things,” Ryder said. “They can go through this trailer and be seen by the provider. It’s just like an alternate emergency department entrance. You go in and register, get seen by a nurse and the same emergency department doctor that is in inside the emergency room sees you out there. You can get swabbed and treated, and either admitted or discharged directly from there.”

The alternate emergency department entrance has cut down on the amount of exposure for the rest of the people who are maybe not at risk, Ryder said.

“Other health issues don’t stop because we have COVID going on,” she said.

Also since the COVID-19 pandemic began, Ryder said the hospital is doing universal masking throughout. Everyone who works at the hospital and anyone who comes inside the hospital has to wear a mask. The hospital has restricted the access points, so every employee enters through the emergency room, has their temperature taken and is issued a mask.

“it’s a little bit of a discomfort and lifestyle change, but it’s so that everybody is protecting,” Ryder said. “It’s the same as going to a store how that’s the recommendation now. We all have lives when we leave here. It’s not just for the patients, but we are going home to our families, and we are stopping for groceries and getting gas and getting everything that everybody else is trying to do.”

The hospital also has had restricted access, which has been a challenge for people who have wanted to visit their loved ones, Ryder said.

“A lot of times, people have someone drive them or come with them, and we’ve had to restrict how many people can come in,” she said. “We want to reduce exposure to the community. Every time you come here, there is a potential just like when you go to the grocery store. We just try to limit that.”

Ryder said the hospital does allow one support person per patient if it is required and depending on the patient’s diagnosis, such as an oncology patient or a minor or if someone’s guardian is need.

“That is hard for some people, but at this point, we are several weeks in and everybody knows the game plan,” she said. “We are not having as much resistance at the door as we did when this first kicked.”

Roy Werner, the medical director of the emergency department, said he has noticed the community being supportive of the restricted access orders.
“It’s been amazing to see how well they have socially distanced and allowed people that opportunity to get the care they need and not interfere by getting themselves exposed or exposing other people,” he said.

Ryder said it is obvious the community is doing the right thing, as the hospital has not seen a tidal wave like other areas have experienced.

Additionally, hospital staff wanted to remind the public to seek care if it is needed. Ryder said hospitals across the system are having decreased numbers of people coming into all departments due to fear of COVID-19.

“We have a separate entrance for COVID patients to keep them segregated,” she said. “It’s semi-concerning because we want to make sure people aren’t toughing out that stroke or heart attack at home.”

“It doesn’t have to be earth-shattering like a heart attack or stroke but little things that people aren’t seeking care for can be concerning,” said Diana Mikulski, the emergency department manager.

Lastly, the hospital staff wanted to thank the community for continued support.

“There has been a lot of outreach from the public to support us from donut deliveries to gift card delivers to surprise pizza,” Mikulski said. “It’s been really nice to have that kind of support, and we are very grateful. We would love to thank everyone of them individually but sometimes it’s a drop off and gone, and you’d never know who that person is. We are very thankful for all the little surprises.”