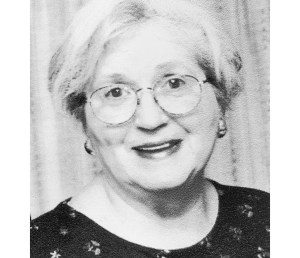 Sally grew up in Charlevois, Michigan, where she was active in band and boating.

She was crowned Miss Charlevoix, in 1946.

Sally graduated from Charlevoix High School, in 1947, she went on to attend Michigan State University, graduating in 1951, graduating with a bachelor’s degree in education. While at MSU, she met her future husband Jim.

On June 14, 1952, Sally and Jim were married in Jackson, Michigan. This union was blessed with three children; Valerie, in 1954, Jerry, in 1956 and Philip, in 1958. She was a loving and devoted wife and mother. After the children came along, she continued her education at Michigan State, graduating in 1962 with her master’s degree in education.

In the ‘50s and ‘60s, Sally was very active in the AAUW and the local art association. She enjoyed creating art and doing crafts. She loved to sing and later became very involved with Sweet Adeline’s where she belonged to both choruses and quartets. While singing with the South Bend Sweet Adeline’s chorus she had the pleasure of performing at Carnegie hall in New York. She loved the international conventions, where she could sing to her hearts content and could listen to others sing for hours on end. She attended a total of 16 internationals.

Sally had many fond memories of her trip to Europe with her sister, Susan, where they took in Europe’s incredible history, beauty and culture. She spent 16 winters of her retirement in Florida, especially enjoying her daily swimming and pool exercises.

Sally taught elementary education for 27 years in the Niles Community Schools, including, Eastside, Northside, Westside and Ballard Schools. She taught two years in Des Plaines, Illinois and one year in Houston, Texas. She was passionate about teaching and was very devoted to her students, they brought her great joy. Sally participated in many pilot programs over the years.

She was preceded in death by her father, Harold, in 1965; her mother, Permelia, in 1931; sister, Susan Webster; and her aunts, Esther Goodall and Martha Brogan.

Her family would like to thank Brentwood, of Niles and Grace Hospice, for their kind and loving care of Sally.

In keeping with her wishes cremation has taken place, and she will be a laid to rest at Calvary cemetery with a private family service, at a later date.

Condolences, photos and memories can be left for Sally’s family at BrownFuneralHomeNiles.com