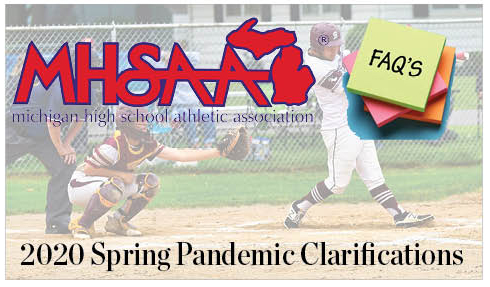 Students are still considered to be enrolled in the school they are attending even though classes are not in the building, but online or virtual. Students who took online courses from another source but did not withdraw from their high school are not considered transfer students, as they did not change schools, but instead took out-side online courses.

There is no change to the maximum enrollment and competition rules. No extra semesters or trimesters of enrollment (fifth-year seniors) will be allowed due to the pandemic crisis. Under the rules, once a student starts the ninth grade at any school, he or she is allowed eight semesters or 12 trimesters, whether online, traditional or home school. The seventh and eighth semesters or 10th and 12th trimesters must be consecutive. Semesters “count” under the rules, whether or not a student plays in a scrimmage or contest. In addition, students who graduate from any high school have exhausted their eligibility.

There is no change to the MHSAA minimum academic standard that a student must have passed 66 percent of a full-time student’s course load (generally four of five or six classes) during the most recent previous semester or trimester, including the second semester of 2019-20 impacted by the pandemic. MHSAA rules only require receiving credit, so “pass or fail” without a letter grade is acceptable. A school may determine on its own to waive rules or standards that are stronger than the MHSAA minimum, e.g., not requiring a GPA or that a student pass all classes.

As always, a student can make up a deficiency of credit in the summer or in a subsequent term (online), as long as the school accepts the credit. It is not required that courses used to make up a deficiency of credit be the same as a course not passed in the previous term. The Current Academic Credit rule, (e.g., weekly grade checks) has no bearing on eligibility in the pandemic crisis until students return to school in the fall.

There is no change to the sport-specific transfer regulation as a result of the pandemic crisis. A student who, after starting the ninth grade, changes schools (unless he or she meets the stated exceptions such as a full and complete residential change) is not eligible in a sport “participated in” during the previous season or school year. A fall or winter athlete who participated as above and changes schools will not be eligible unless an exception is met. Participation under the rules means playing in or entering one scrimmage or contest against another school. Simply practicing with a team is not considered participation under the transfer rule. A spring sport athlete who never got into a scrimmage or a game this spring could change schools and be eligible next spring in his or her sport. More information on the transfer rule is available at mhsaa.com.