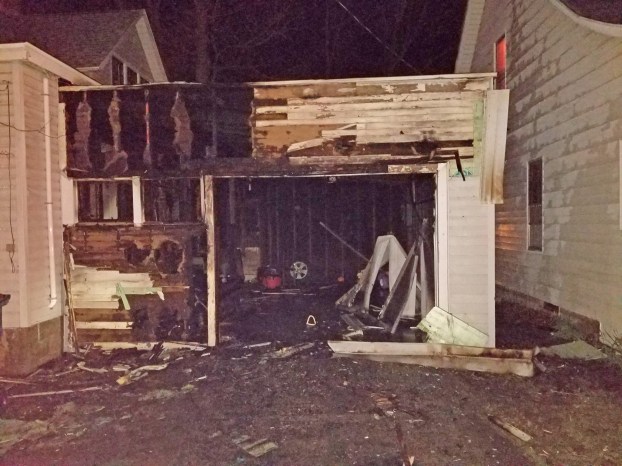 DOWAGIAC — No one was injured in a structure fire in the city of Dowagiac Tuesday night, according to the Dowagiac Fire Department.

The Dowagiac Fire Department and Wayne Township Fire Department were dispatched to a reported structure fire in the 100 block of James Street around 9:30 p.m. Tuesday. At the time of dispatch, firefighters were informed that a man was believed to be in the structure.

Units arrived in three minutes and observed fire traveling up the interior and exterior wall of the attached garage. Crews worked simultaneously to attack the fire and search the smoke-filled house for anyone inside, according Deputy Fire Chief Robert Smith. The fire was extinguished, search completed and declared under control in 15 minutes.

Search efforts did not find anyone inside the residence.

Fire damage was contained to the garage and firefighters used ventilation equipment to remove smoke from the residence. SEMCO and Dowagiac City Department of Public Service Electric disconnected utilities until the status of the residence can be evaluated.

It was determined that no one was at home at the time of fire, according to the fire report.

In interviewing the resident during the investigation, he told firefighters he occasionally smokes in the garage, and there had been a small pile of older clothing on a small step platform where the fire originated.

When the fire began, he had been gone for an hour, and there was evidence of discarded smoking materials in the area of origin.

Smith said the department wanted like to remind everyone of the hazards of not properly disposing of any tobacco/smoking materials after use.