DOWAGIAC — Members of the “You Know You Grew Up in Dowagiac If…” Facebook page know Kalamazoo resident Michael Janssen’s name, even if they have never met him — after all, they cannot scroll far down the page before seeing one of his posts.

Instead of posting about current events or his personal life, Janssen posts snippets of Dowagiac history — scanned images of old newspaper articles, some old enough that the print has smeared and become difficult to read. The pieces include everything from a story about a couple that survived the sinking of the Titanic in 1912 to the case of a Cassopolis man stealing a Dowagiac family’s Thanksgiving meal in 1966.

“I have a lot of fun posting the articles,” Janssen said. “I find a lot of joy and am always interested in the history of Dowagiac.”

For the past few years, Janssen has been regularly posting old newspaper articles relating to Dowagiac and Cass County history for residents to enjoy on Facebook. The articles, some dating back to the 1800s, are reposted from large national newspapers, including the Chicago Tribune. 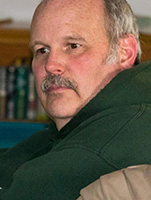 Janssen’s journey into Dowagiac history began after his wife bought him a subscription to Newspapers.com, a website that archives newspapers across the country, some dating back more than 100 years. Despite being a Kalamazoo native, Janssen found a fascination with Dowagiac history, as his family hailed from the area before moving to Kalamazoo before his birth.

When he first received his subscription, he decided to look up his great uncle, Thomas J. Bresnahan, who was a prosecutor from 1906 to 1910. When Janssen looked up Bresnahan, he found dozens of articles, including several about how he had prosecuted the case of a serial killer.

“When I put in his name, so many cases came up,” Janssen recalled. “It wasn’t just the Kalamazoo paper covering it either — it was San Francisco papers, it was Boston papers, it was New York papers. It was unusual to me to see this kind of rural town written about all across the U.S.”

Those articles about his great uncle got Janssen hooked on Dowagiac, and he began to feel a desire to share his passion for the area’s history with others. That’s when he took to posting an article to the “You Know You Grew Up in Dowagiac If…” Facebook page.

“I thought, well, would anyone want to hear about these cases? Because no one was around in 1908 when some of these cases took place,” Janssen said. “I posted one case, and people said, ‘that’s pretty interesting. What else have you got?’”

From then on, Janssen began posting articles regularly in the group — everything from the tragic (such as a 1977 article detailing the fire of the Dowagiac Theater) to the inspirational (a 1964 story about the Dowagiac sports banquet featuring a speaker who had overcome bone disease) to the fun (such as an article from 1916 detailing the best places in Cass County to catch Brook Trout).

“For such a little town, Dowagiac has a really great history,” Janssen said. “You’ve got Round Oak. You have a famous war correspondent that was born there. The list goes on and on. A lot of interesting people came from here.” 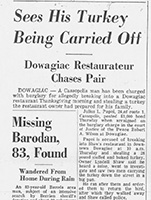 So far, Janssen said he has received a positive reaction to the articles he posts, and many people have asked him to look up specific articles that include information about their family members or events they remember. While Janssen said he is happy that he can bring a smile to someone’s face or provide some form of closure to his readers, he believes he gets the most joy out of his hobby of collecting Dowagiac history. Janssen said he plans to continue to research and post Dowagiac articles from the past. Once COVID-19 travel restrictions are lifted, he hopes to visit the Dowagiac District Library to search its archives.

“I’ve always been interested in history, and to me, just reading a short summary in a book doesn’t get to the heart of the matter,” Janssen said. “If you go back to the newspaper articles of the day, you can actually understand what the people were feeling, what was going on around them, what the atmosphere at the time was. You can go back in time, per se, and reconstruct what their day to day life was like. … Newspapers bring people to life. They were happy. They were sad. There were things that brought them joy, and things that brought them sorrow, and I think newspapers really preserve that.”

DOWAGIAC — No one was injured in a structure fire in the city of Dowagiac Tuesday night, according to the... read more