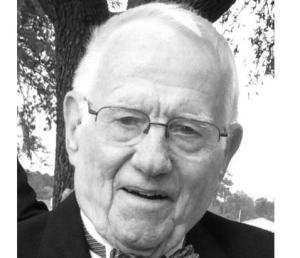 Donald James (Smitty) Smith, 88, of Dowagiac, passed away peacefully on Tuesday, April 21, 2020, at his daughter’s home.

Donald’s life began on July 12, 1931, the son of Virgil and Angela (Ptaszkiewicz) Smith.

He graduated from Dowagiac High School and proudly served his country during the Korean War.

Donald worked in the door and glazing industry the majority of his life. He held various positions at Cupples in Dowagiac and New Brunswick, New Jersey. Donald was a long-time employee of Special-Lite, Inc. of Decatur. He worked there from its inception in many roles, including field service and production management.

After retirement he enjoyed golfing, fishing and deer hunting at his family cabin up north.

A private family service will be at a later date.

Memorial contributions may be made to Hospice at Home — The Caring Circle.

Arrangements have been entrusted to Clark Chapel & Cremation Services. Those wishing to leave a memorial contribution online may do so at clarkch.com.

Reid A. Francis, of Cassopolis