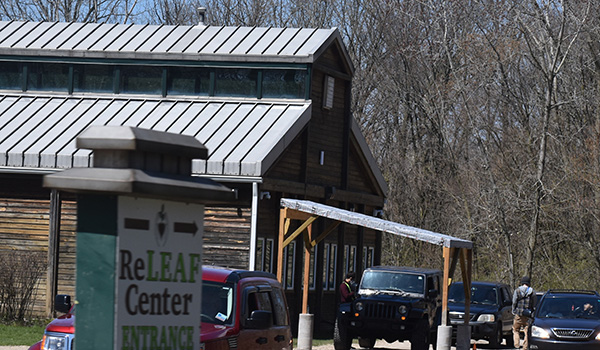 NILES — Marijuana dispensaries in Niles saw a boost to their businesses on Monday, as April 20, better known as 4/20, rolled in.

The date is the unofficial holiday of marijuana enthusiasts around the country. With COVID-19 mandates keeping dispensary showrooms closed to the public, two local businesses have adapted to offer curbside delivery service to both their medical patients and recreational-use customers.

The ReLeaf Center, on Terminal Road, had cars lined up around its building as staff served patients and customers in a drive-thru fashion. At Green Stem, on S. 11th Street, patients and consumers parked in the lot and were served by “bud runners.” For both centers, it was the first 4/20 since opening for business.

Green Stem’s CEO George Lynch reported having 335 point of sales on Monday alone, with his daily average is around 200.

“It was our first [4/20] as an operator,” Lynch said. “It was eye opening. I was glad we staffed the way we did. We had a full staff here yesterday, almost all hands on deck.”

With the Green Stem “bud runners” literally running in and out of the shop, Lynch found himself answering the more-lengthy questions that new customers came to them with.

At The Releaf Center, the drive-thru and curbside service line wrapped around the building throughout the day.

“We’re just blessed enough to have the property to do it,” said George Pittenturf, manager at The ReLeaf Center. “It seems to work really good with what’s happening now.”

Throughout the day, the center had its own runners going from cars to take orders and payments.

“There were more recreational sales than medicinal sales,” Pittenturf said. “But we still try to make it known that we have product and we want to take care of the patients that come through.”

Pittenturf is grateful that he has the facilities, team, patients and customers to continue business during the uncertainty many businesses face amid COVID-19 mandates.

“People now are missing out on social interactions,” Pittenturf said. “Any type of good social interaction is good. It lifts peoples’ spirits up. I am fortunate enough to be thankful that I get to interact with a bunch of other people.”

While taking the necessary distancing, glove and mask precautions, Pittenturf finds increased value in the center’s interactions during busy days.

“We found out we can handle 335 customers, no problem,” Lynch said.  “We will be ready when we can get the doors back open.”