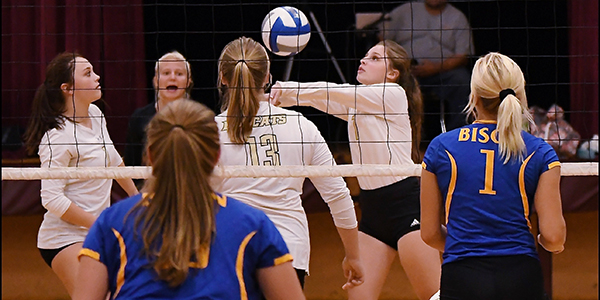 New Buffalo, seen here playing against Brandywine in BSC volleyball last fall, will be moving up from Class D to Class C according to the MHSAA. (Leader file photo)

EAST LANSING — Classifications for Michigan High School Athletic Association elections and postseason tournaments for the 2020-21 school year have been announced — including football divisions determined preseason for the first time since 1998 — and with enrollment breaks for postseason tournaments posted to each sport’s page on the MHSAA website.

Classifications for the upcoming school year are based on a second-semester count date, which for MHSAA purposes was Feb. 12. The enrollment figure submitted for athletic classification purposes may be different from the count submitted for school aid purposes, as it does not include students ineligible for athletic competition because they reached their 19th birthday prior to Sept. 1 of the current school year and will not include alternative education students if none are allowed athletic eligibility by the local school district.

All sports’ tournaments are conducted with schools assigned to equal or nearly equal divisions, with lines dependent on how many schools participate in those respective sports.

For 2020-21, there are 752 tournament-qualified member schools. Schools recently were notified of their classification, and sport-by-sport divisions were posted to the MHSAA website Monday.

MHSAA Executive Director Mark Uyl said schools may not subsequently lower their enrollment figure. However, if revised enrollment figures are higher and indicate that a school should be playing in a higher division, that school would be moved up.

Football will undergo a significant classification change for the 2020 season, with teams in both 11 and 8-player assigned their divisions before the season for the first time since 1998; from 1999-2019, divisions for the 256-team 11-player field (and later the 8-player tournament) were determined after the regular season. A hard enrollment limit also will take effect this fall for teams to be eligible for the 8-player tournament — all schools with 215 or fewer students are eligible for the 8-player playoffs if they play that format during the regular season.

Several 2019-20 champions will be playing in different divisions in 2020-21. Grand Rapids Forest Hills Northern’s boys soccer team will move into Division 1 after winning the Division 2 title in 2019. The East Grand Rapids girls swimming and diving team will move back into Lower Peninsula Division 2 — which it won in 2017 — after earning the last two championships in Division 3.

Visit the respective sport pages on the MHSAA website at mhsaa.com/sports to review the divisional alignments for all MHSAA-sponsored tournament sports.

Traditional classes (A, B, C, D) — formerly used to establish tournament classifications — are used only for MHSAA elections. To determine traditional classifications, after all counts are submitted, tournament-qualified member schools are ranked according to enrollment and then split as closely into quarters as possible. For 2020-21, there are 188 member schools in each class.

The new classification breaks will see 18 schools move up in Class for 2020-21, while 15 schools will move down:

Moving Up from Class B to Class A

Moving Down from Class A to Class B

Moving Up from Class C to Class B

Moving Down from Class B to Class C

Moving Up from Class D to Class C

Detroit Academy of the Americas

Detroit The School at Marygrove

Moving up from Class D to Class B

Moving Down from Class C to Class D

(Number of schools in parentheses)

LANSING — The Michigan Council for Arts and Cultural Affairs has launched a new program providing a total of $502,400... read more