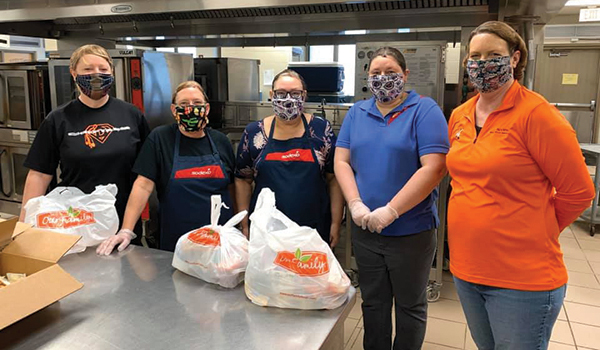 DOWAGIAC — Last Friday, those working for Sodexo Food Service delivering meals to students Monday through Friday received a donation of designer face masks to continue to stay safe during the COVID-19 pandemic.

The woman behind creating the carefully stitched masks was Michele Harlow, of Edwardsburg, who is a friend of Sodexo employee Kellie Prak.

“Kellie Prak reached out and asked me if I was selling masks, which I am not — I am only donating them,” Harlow said. “She needed 10, so I just made her 10 masks. I figured it was the least I could do.”

Five Sodexo employees wore the masks in a photo posted to a Facebook page thanking Harlow. In an effort to ensure students are fed during the pandemic, Sodexo has been delivering breakfasts and lunches to 13 locations across Dowagiac since March 16. On Fridays, backpacks are passed out with meals for the weekend.

Harlow first started creating fabric masks after seeing a post on Facebook and reaching out to several friends who are nurses.

“Before I even started, I asked if it was something they could use,” Harlow said. “I have a sewing machine. I don’t really sew, I just kind of have one. I figured if I could do something to help, I wasn’t doing anything else, so I might as well.”

Harlow started by making some masks for a friend who works in a mother-baby unit and needed washable covers. The pattern was consistent with the pattern Harlow had found online.

She began posting on Facebook, asking if members of the community or friends needed the extra safety precaution. She also started dedicating her free time to sewing.

“I kind of just made a bunch, and I have mailed them to people,” Harlow said. “I have friends who are kind of all over.”

In total, Harlow said she had mailed masks to about 10 different people for them to distribute around their offices as needed.

Harlow left the Sodexo masks on her porch, and Prak picked them up. Harlow uses a box on her front porch to safely distribute the finished masks.

“I just put people’s names on them, that way it is a no-contact pickup,” she said.

As the COVID-19 pandemic situation has evolved, so has Harlow’s sewing.

“At first, I was only making them for nurses because they were so short [on masks], but once that kind of got caught up, and a lot of the nurses and doctors were able to get more of the disposable kind through places,” Harlow said she began making them for other front-line workers.

Now, Harlow has started getting requests from people who have doctor’s appointments or from essential workers who are still working — Sodexo Food Service included.

“My cousin works at a bank, so I made her some,” Harlow said. “I am making them for the people who are out and about regularly and are still needing them.”

As long as there is a need for the masks, Harlow said she would continue to stitch the pieces together.

“It got a little slow this weekend because it was nice out,” Harlow said. “The snowy, crappy days make it a little nicer to make them than when you’d rather be outside.”