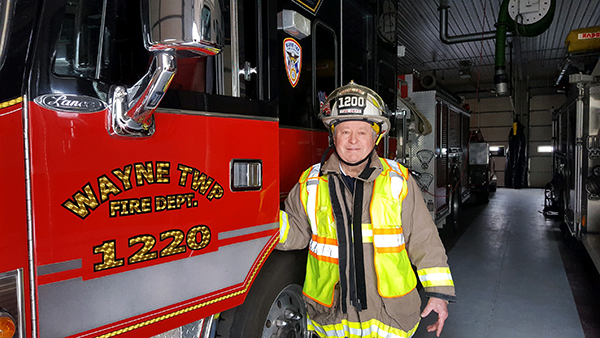 WAYNE TOWNSHIP — For the first time in 33 years, the Wayne Township Fire Department has a new fire chief.

Dr. Frank Butts was sworn in as the Wayne Township Fire Chief on April 6, as the third fire chief the department has appointed since its inception in 1986.

Wayne Township’s first fire chief, Levi VanTuyle, served from 1986 to 1987, followed by Harry Wickett, who served as chief for 33 years until he died last December.

For 30 years of Wickett’s service, Butts served alongside him in the position of assistant chief.

Butts said his appointment was an honor but also comes during a time of grieving.

“It’s a little bit of a sad time because [Wickett] just recently passed away, and so we have had some adjustments,” he said. “Some of the guys have had some time in being disappointed with the chief passing away. You have to have a good strong form of command. The former chief and I worked very closely together.”

Butts, who owned a veterinary practice in Dowagiac for 42 years, became involved in Wayne Township in 1986, while serving as a trustee on the township board. That year, the township created its fire department.

“There was a need for volunteers, so I volunteered,” he said.

After selling his practice, Butts became even more active in the fire department and on the township board, where he now serves as supervisor.

As fire chief, Butts does not anticipate any big changes. For the past year, he has been overseeing much of the department’s operations.

Butts added the Wayne Township Fire Department is overseen by a fire administrative board. The board oversees the operations of the department in terms of purchases, appointing the fire chief and other administrative duties.

“I don’t expect there to be any changes there. The fire administrative board is very helpful and that gets away from really any conflict of interest,” Butts said, adding that his position of supervisor does not directly control the fire department.

With Butts taking the role of chief, the assistant chief position will be filled by Craig Yeager, who also started working with the Wayne Township Fire Department in 1987.

“He has been a captain most of that time, so he is very familiar with operations of the department,” Butts said. “I have appointed him as the assistant chief, and he has been a lot of help.”

In addition to serving Wayne Township, the fire department also provides coverage for Volinia and the northern portion of LaGrange Township. A dual dispatch agreement has also been in place with the city of Dowagiac for two years regarding structure fires within the city.

“In rural communities, it is difficult to have enough volunteer firefighters during the day,” Butts said. “The township doesn’t have any full-time firemen, so if we have a car accident or a structure fire, it’s difficult to have enough personal since some of our volunteers are at their full-time jobs. We entered into an agreement so anytime there’s a structure fire night or day or on weekends, if it’s one in the city, Wayne Township is automatically dispatched. If there is one in the township of Wayne [jurisdiction], Dowagiac Fire Department is automatically dispatched.”

Butts said the dual dispatch agreement ensures the fire departments have enough manpower at all times of the day.

“That has been a good thing,” Butts said.